For me, Taiwan is like Italy. I don’t mean to imply the two are similar—they aren’t. Rather that they have a couple things in common which stand out in my mind. I’m not trying to place any blame. I accept that it might be me. But both places have an uncanny ability to annoy the shit out of me. Then, just when I decide I’m never coming back, I find something so delicious and unlike anything I’ve ever tasted. All is forgiven.

Italy seems far in the past at this point, but let me tell you about Taiwan. My expectation was I would love it. I had even decided so beforehand. Before leaving Seattle, we shared our plans with friends. The lack of interest in Taiwan surprised me. Even my friend from Taiwan was more excited about the prospect of going to China. No expectations can lead to pleasant surprises. Too many expectations can lead to disappointment.

So it was with Taiwan. We did get off to a rocky start after stepping off the boat from Xiamen with a customs debacle involving fresh fruit. In hindsight, this experience felt far more friendly than I imagine it would have in the US. (But I’d be too scared to try and confirm this assumption.) In short, Taiwan is serious about fruit, and for good reason. It’s some of the best I’ve ever had. (I’m still craving the guava—both flavorful and beautiful—which is more than I can say for dragonfruit.) Friendliness became a recurring theme during our time there. Friendly doesn’t quite describe it. It’s a welcoming attitude that feels partly cultural and also very personal. 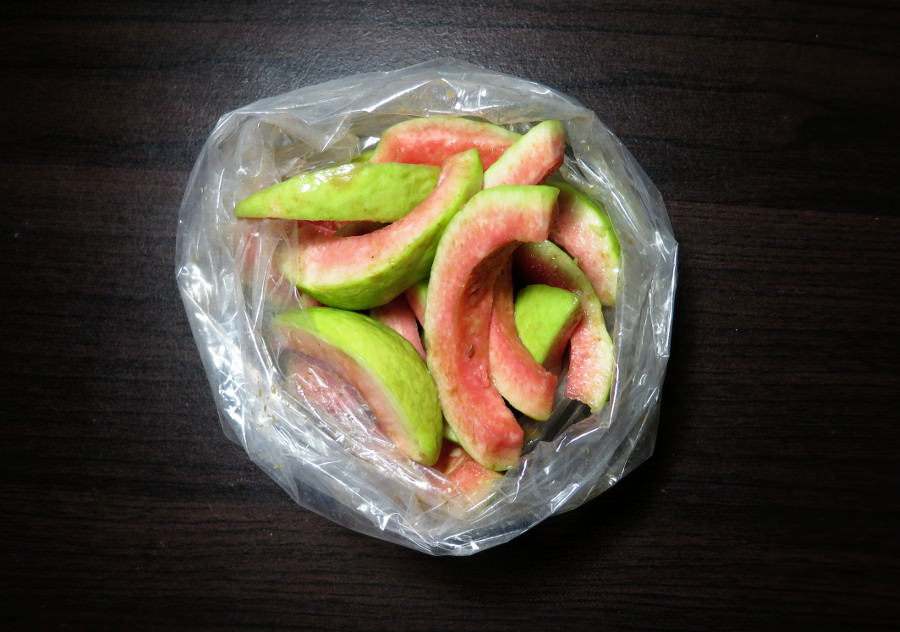 Fresh pink guava slices from Taiwan’s Hualien Night Market. We were lucky to visit during the short window of time that strawberry and mango seasons overlap. Both fruits make spectacular shaved ice. But I quickly discovered my favorite fruit for snacking was the Taiwanese guava.

Still, this characteristic wasn’t obvious to us at first. Instead, the welcoming nature of the place unfolded over the course of our time there. A woman inviting us to visit her weekend home. The owner of our hostel treating his guests to a traditional Taiwanese dinner. A couple and their out-of-town friend inviting us to dinner after being spotted in a temple. That same friend and her husband showing us around their city almost two weeks later. Our first reunion with my college friend, who treated us to dinner at an acclaimed restaurant. Not only that, but she and her husband gave us the best pineapple cakes. (Winter melon is often used as a cheap filler in these shortbread cookies. Ours were made only with Taiwanese pineapple.) 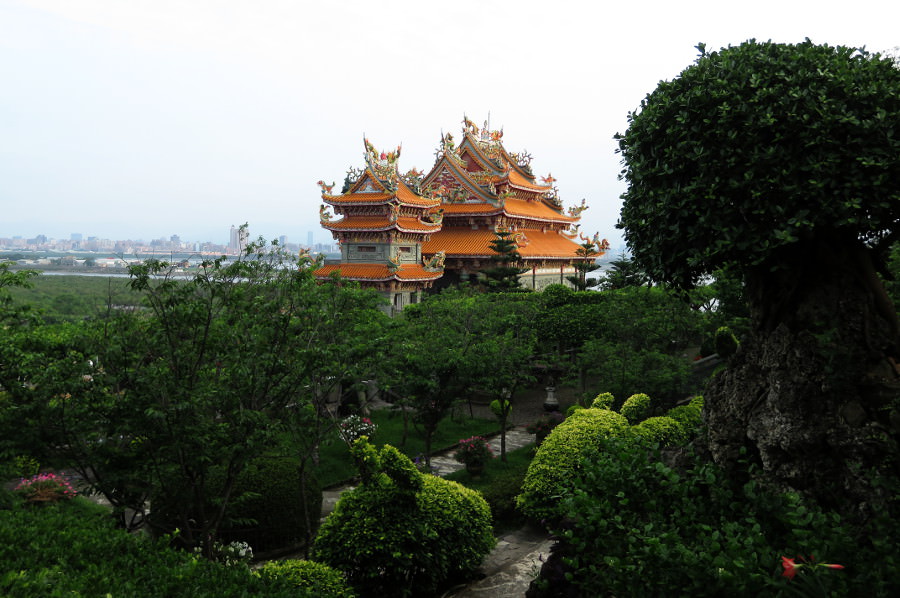 We visited the Daoist Guandu temple as part of our day tour around greater Taipei with new friends. Taiwan has an extraordinary number of temples. We did our best to see quite a few of them, especially in Taiwan’s oldest city and former capital of Tainan.

Rather than the people or the food, our first impressions were of scooters. Lots and lots of scooters. More than I’ve ever seen. This might be okay if I also saw lots and lots of sidewalks. We did see something that looked like sidewalks. But they were the personal storage/cooking/socializing/parking area (yes, for scooters) for each shop owner we passed. Whatever they’re called, very few “sidewalks” seemed to be for walking. No that’s what the road is for. You know, where the scooters (and cars and trucks) are. But every once in a while, even the scooters could be a charming surprise … (you’ll have to watch the video).

We persisted in walking because sometimes there wasn’t a subway. Even if there was, we usually had some distance to reach it. Wherever we were going often involved food. Finally we’d show up. Sweaty and annoyed—even in April the humidity is incredible—we’d munch our way into delight. Sometimes, it was a simple night market snack. Other times, we’d splurge on a series of Japanese or Taiwanese dishes. Then there were those periods of overindulgence in my newfound loves of douhua or shaved ice. More often than not, Taiwan made me feel like I was eating some of the best food I’ve ever had. There are only a few countries in the world where it might be possible to never have a bad meal: Italy, Turkey, and Japan. Taiwan is my latest addition to that list. 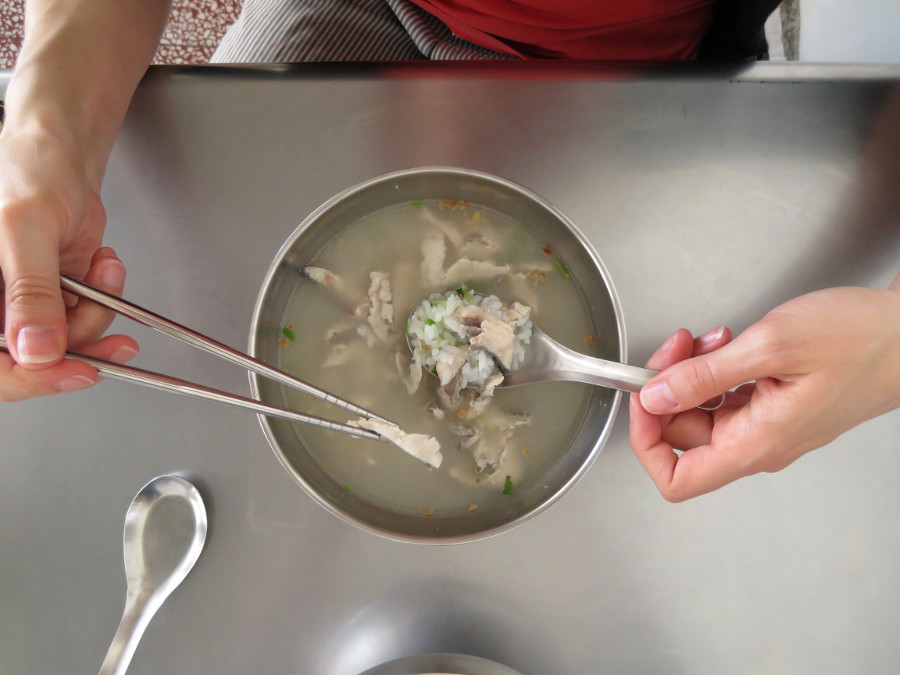 Our commitment to trying local specialties runs deep. We ate milkfish congee for breakfast in 90+ degree temperatures. Milkfish is a fatty, boney fish farmed near Tainan, Taiwan. It’s used in this delicious porridge (available at 5:00 AM, or so I’ve heard) and also pan-fried. While simple and delicious, we were ready to pass out from heat exhaustion afterwards. A condition remedied by only eating shaved ice for the rest of the day.

Why Is Taiwan So Special?

The fantastic food kept us satisfied and excited to return. Of course, the people are also part of what make Taiwan such an endearing place. Like all islands, the natural environment has a uniqueness to it. The culture is Chinese, but with its own Taiwanese twist. Perhaps a bit like Hawaii—American, yes, but with so much more complexity. 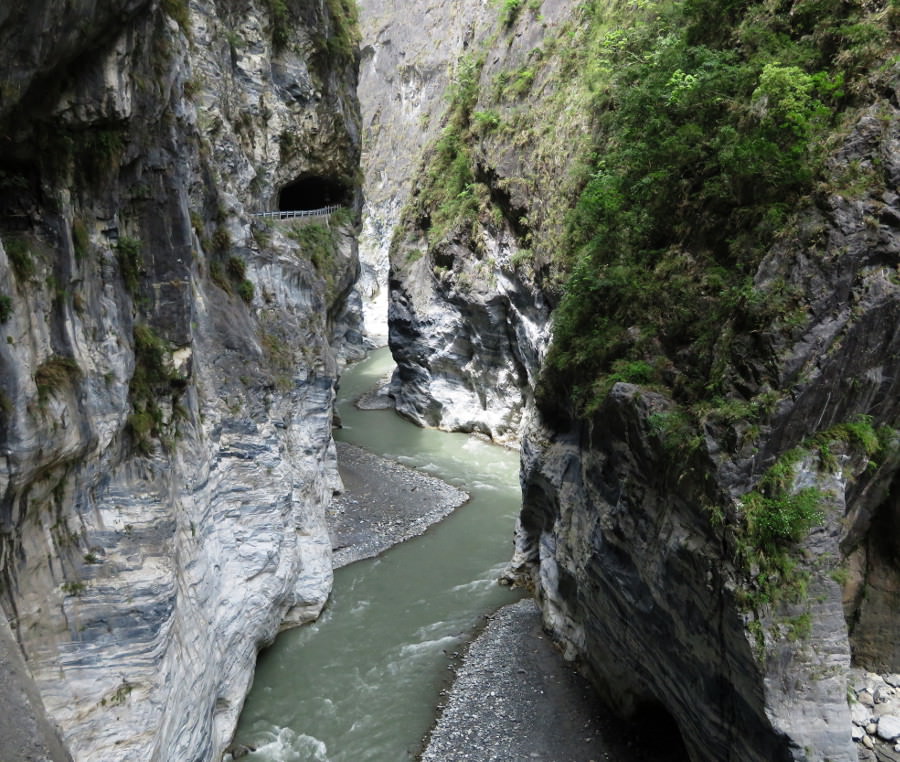 Hiking Taroko Gorge in Taiwan’s Taroko National Park. The most famous of Taiwan’s parks, Taroko is easy to visit as a day trip from the east coast city of Hualien.

It’s this mix of novelty and comfort that tricks travelers into taking things for granted. After five weeks in Taiwan, it was way too easy to do just that. But no worries, because at the end of April, we took the boat back to China. And nothing comes too easy in mainland China.