Breezy promenades. Urban parks. Island getaways. China doesn’t come to mind. But that’s exactly what the southern seaside city of Xiamen has to offer. A boon for the long-term traveler? Blissfully few (I would argue no) must-see sights. Instead, Xiamen offers fun cafes, pedestrianized walkways, and low humidity. It’s the perfect city to enjoy a non-touristy side of China. 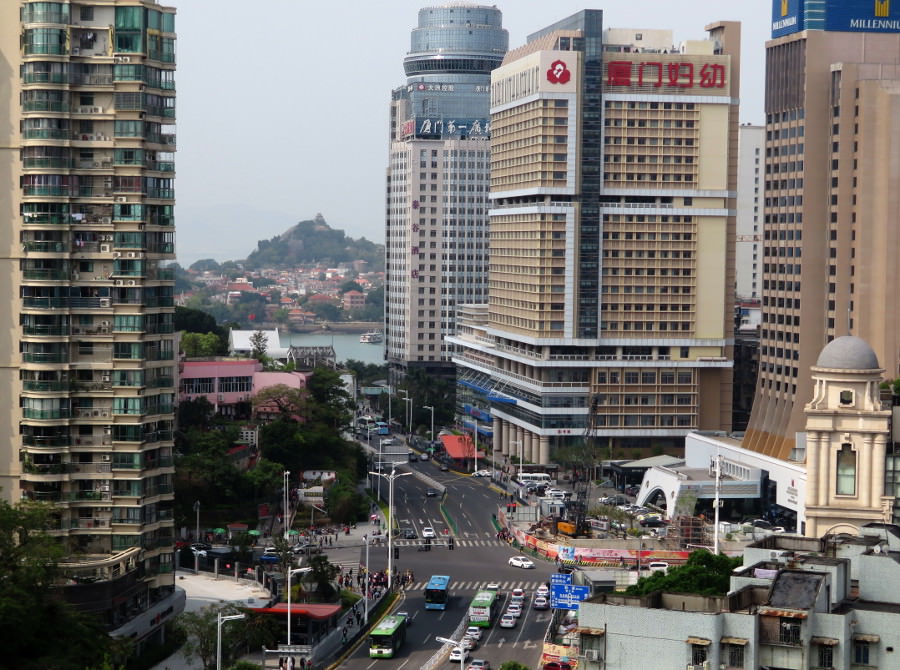 China’s Xiamen City as seen from our apartment in a residential block tower along Zhenhai Lu. Xiamen itself is already an island. But the even more famous pedestrianized island of Gulangyu is in the distance.

Xiamen (written as 厦门 and roughly pronounced She-aa-men, where She-aa is one syllable) was known as Amoy in the past. This island city is famous within China but not so much outside the country. One reason I wanted to spend time there was because it sounded so unlike the rest of China. It’s also a smaller city by Chinese standards, with a population of about 3.5 million. The location across from Taiwan solidified its place on our itinerary. The city became both our jumping off point for travel to Taiwan, and a familiar site upon return to the mainland. 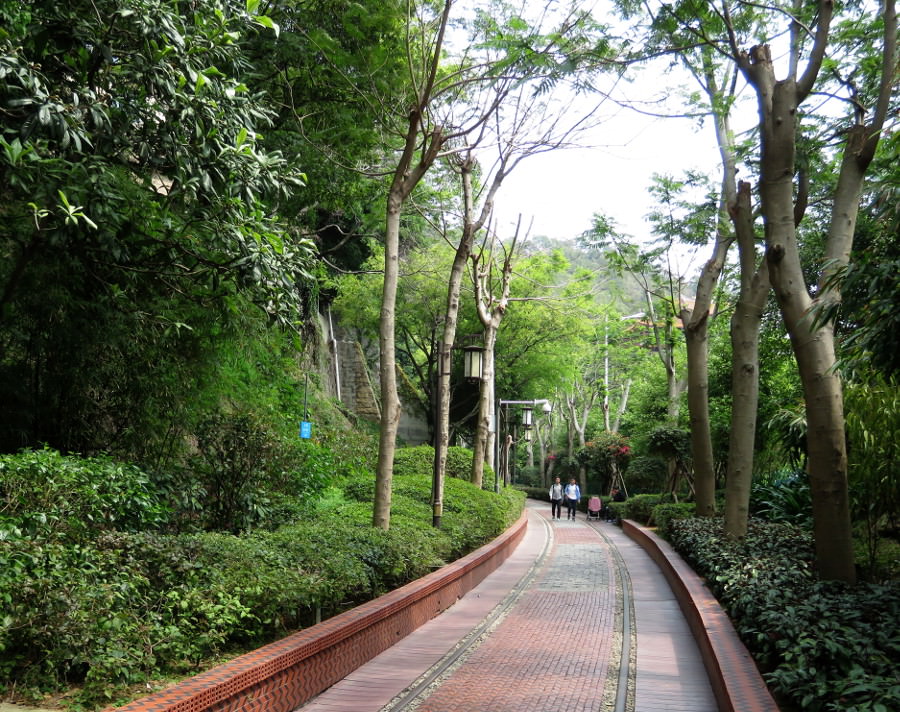 Xiamen must be one of China’s most walkable cities. It has many parks, including Railroad Culture Park, a rail-to-trail conversion.

My guess is Xiamen is unique within China. I have not been (nor do I imagine we will go) to another Chinese city that feels similar. While not undiscovered by Chinese tourists—tour groups can swarm the place—it’s not on the radar of Western tourists. With a full week in the city, we spent some of that time attempting to get tickets for the boat to Taiwan. For the rest, we walked around and drank coffee. 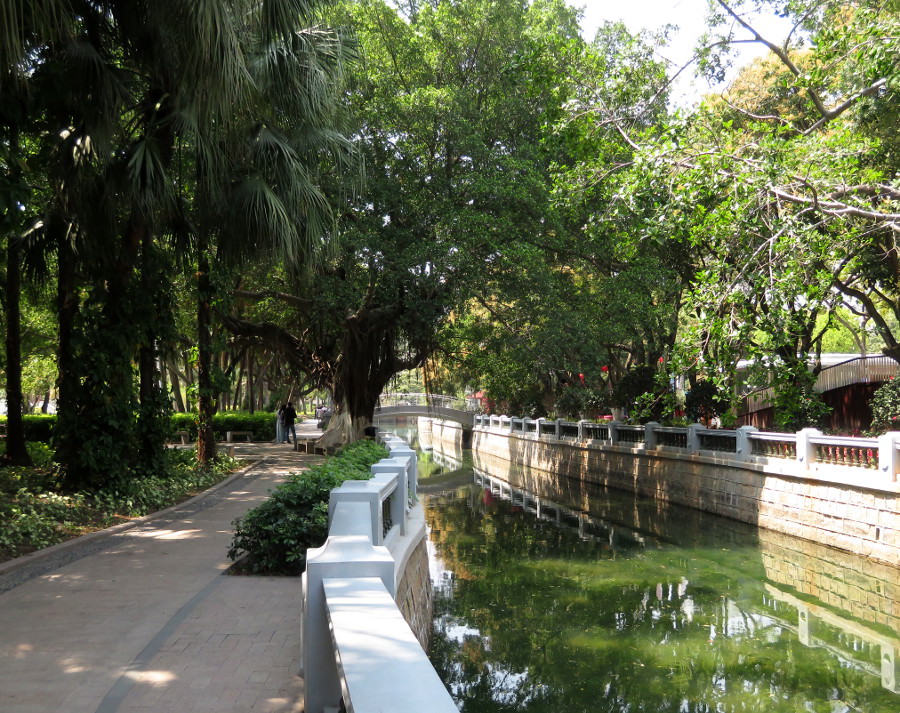 Thanks to pedestrianized streets and walkways, we could connect many areas on foot. But we also wandered the city’s parks. The most convenient was Zhongshan Park, where we did some unexpected birding. 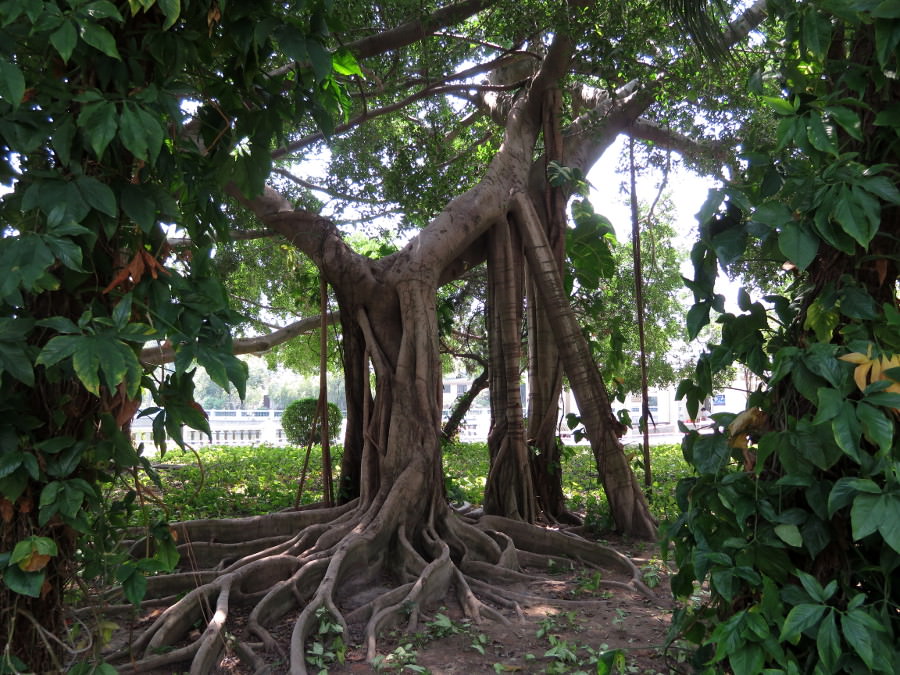 Ficus tree in Zhongshan Park. If you’ve read my previous post about nature in Hong Kong, you know I appreciate an amazing tree. Xiamen did not disappoint. 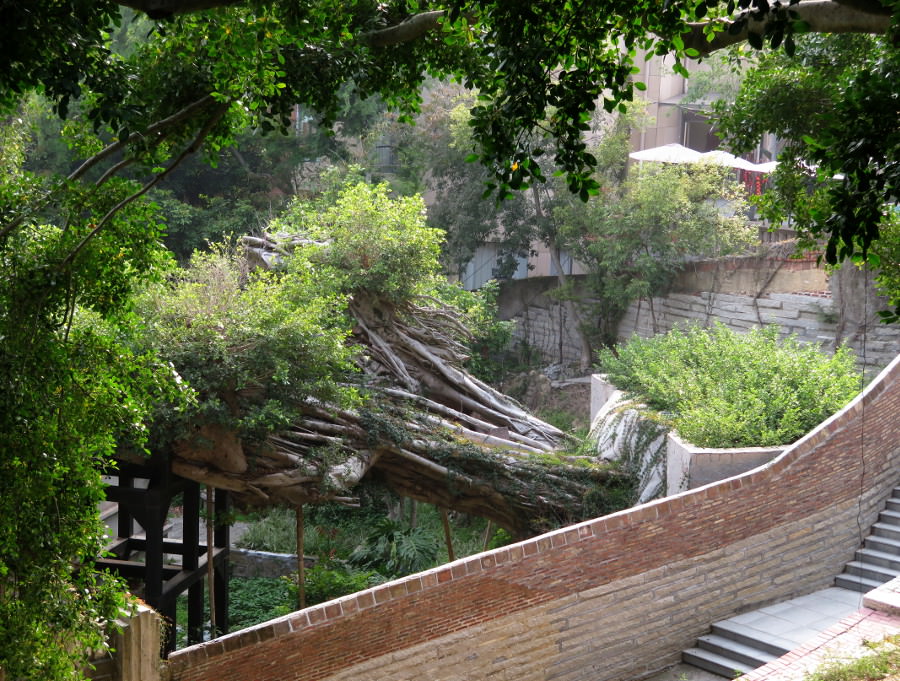 Gulangyu, a 10-minute boat ride from Xiamen, has its own collection of beautiful old trees. Many need elaborate support methods to survive. 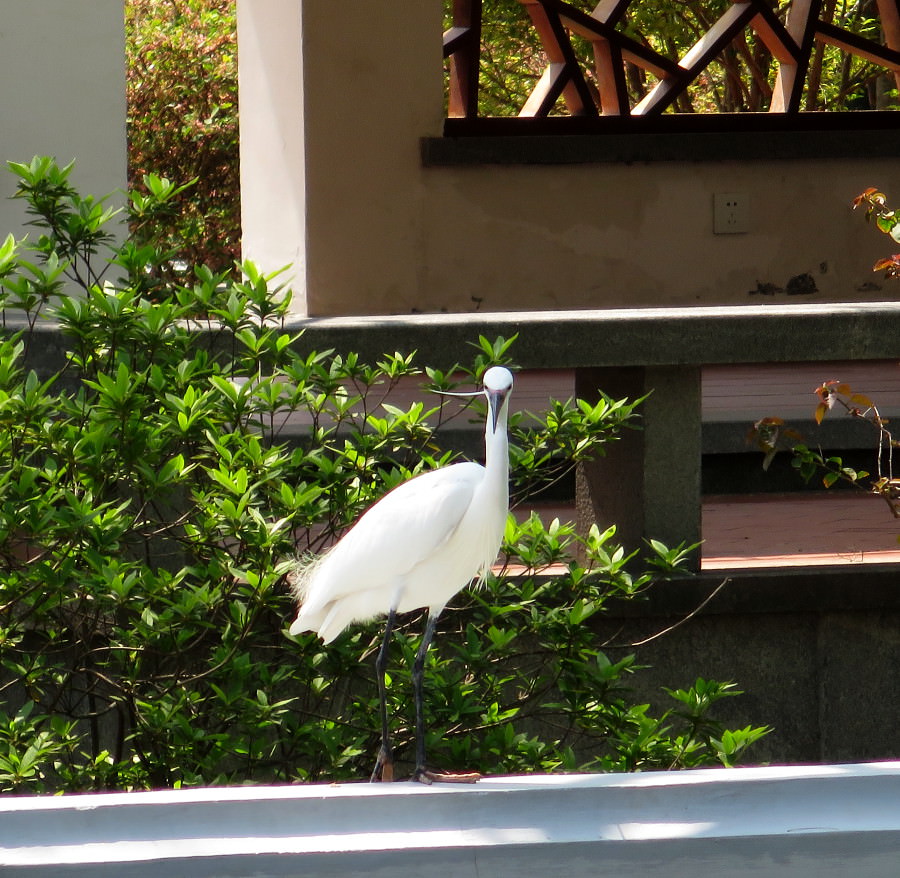 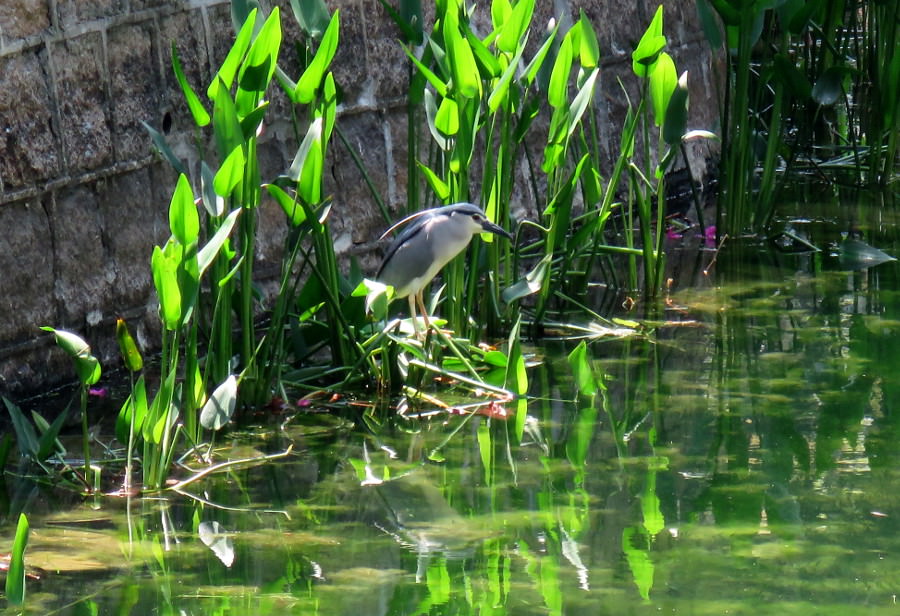 Xiamen offers the standard dishes: handmade dumplings, noodles, fried bread, soups and rice. These were no surprise. The unexpected pleasures were good coffee, organic groceries, and Southern Min cuisine. The city even boasts a famous “coffee street,” although this sounded too touristy for us. Instead, I recommend you drink your coffee along Daxue Lu (near Xiamen University). 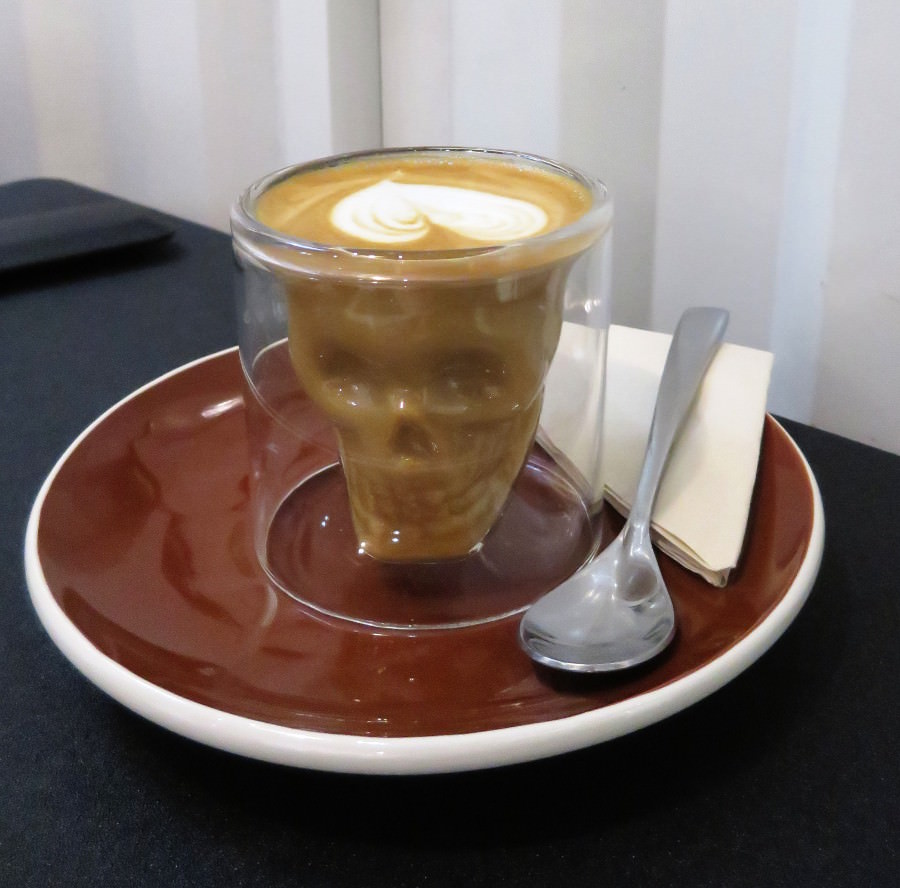 Cortado served in skeleton-shaped glass at Barista Honor, possibly the most hipster of coffee shops in Xiamen.

We made good use of our apartment kitchen and the nearby organic grocery store. I’ve come to appreciate both of these luxuries more and more the longer we travel. Once upon a time, I was actually cautious about the foods I chose to eat in China. So while I prefer to buy my produce from markets, I used the organic store to try hard-to-peel and pre-cut fruits because I thought it might be safer. I’ve since come to my senses and eat whatever looks good. 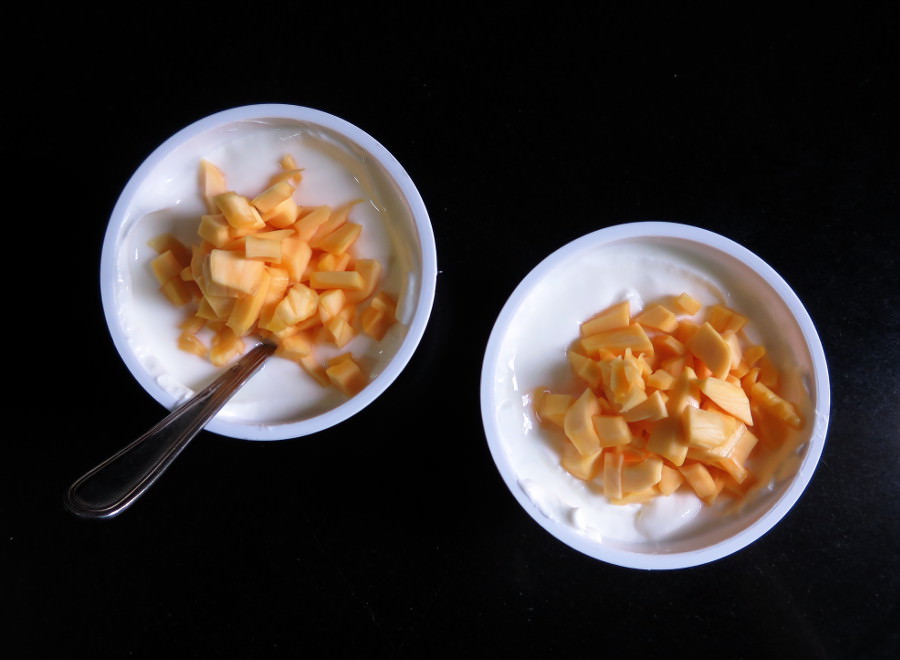 A favorite breakfast while traveling: yogurt, muesli (if available) and fresh fruit. Good yogurt is the hardest of these to find so we splurged when we found organic yogurt made without sugar. Here topped with fresh jackfruit.

While I don’t have a rice cooker at home, it has now become an essential item. In fact, I can feel my own annoyance in discovering rental kitchens without them. When you’re on the hunt for every meal (and can only sort of read the menu), simple rice-based dishes are a relief. 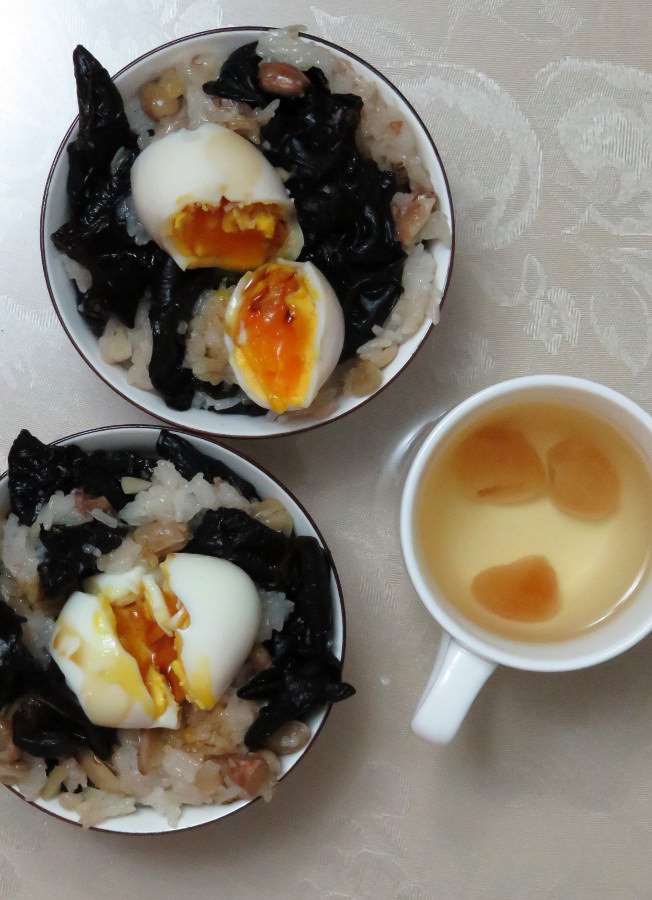 The most simple meals on the road are those you can throw into the rice cooker. We made steamed rice with organic wood ear mushrooms and peanuts, topped off with a soft-boiled egg. Served with Dried Longan Tea.

By far the most exciting meal we ate during the week was in the old part of town. Our new friend and longtime resident of the city, Wei Wei, took us to a local place serving Southern Min cuisine. Not only are the foods bought each morning at the market, but the open kitchen is visible from the street. This is absolutely our favorite kind of place to discover while traveling. We were so thankful Wei Wei shared it with us. Even more so, because it is almost inaccessible if you don’t speak the local dialect of Minnanhua.

We tried the yellow-and-sliver colored fish, but not the flounder-like fish in the back row. The smaller fish is called huanghuayu (黄花鱼), which literally means “yellow flower fish.” It’s called yellow croaker in English. It’s a tasty fish that’s definitely worth trying. But also know that yellow croaker is not a sustainable choice. Wild stocks are depleted so yellow croaker is only available farmed. Fish farms in China are often tied to environmental problems due to poor management. 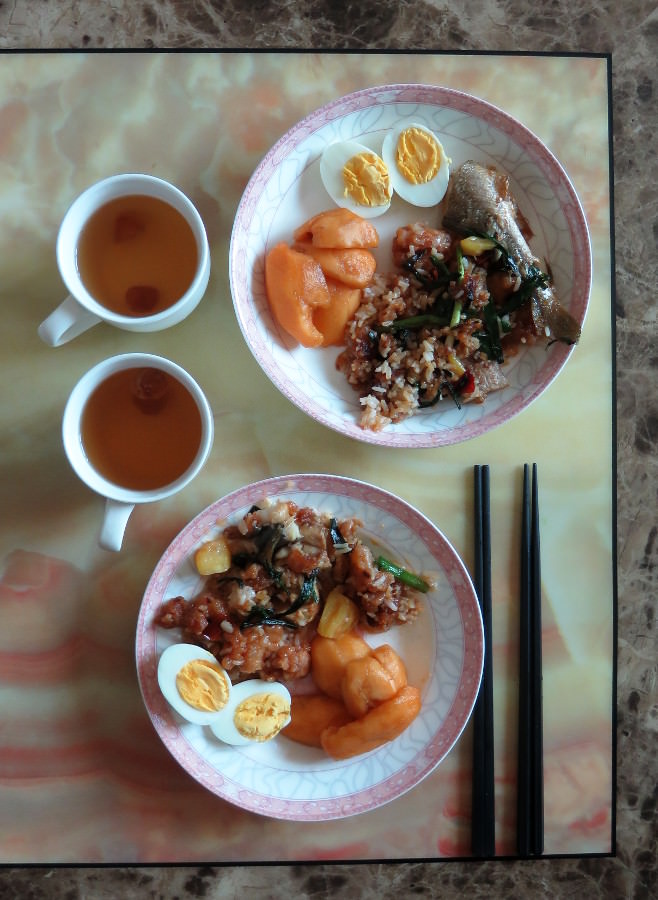 We didn’t get photos of our dinner in old Xiamen, but we made sure to take home every scrap of leftovers. These included the remaining few bites of sweet and sour pork, a fish tail (mine!), fried rice and cooked greens. Paired with hard-boiled eggs, fresh loquats and longan tea, we enjoyed a second outstanding meal.

But Don’t Forget This is China

Make no mistake, this is still China. Sometimes that’s reflected in artificial facades that look more European than Chinese. 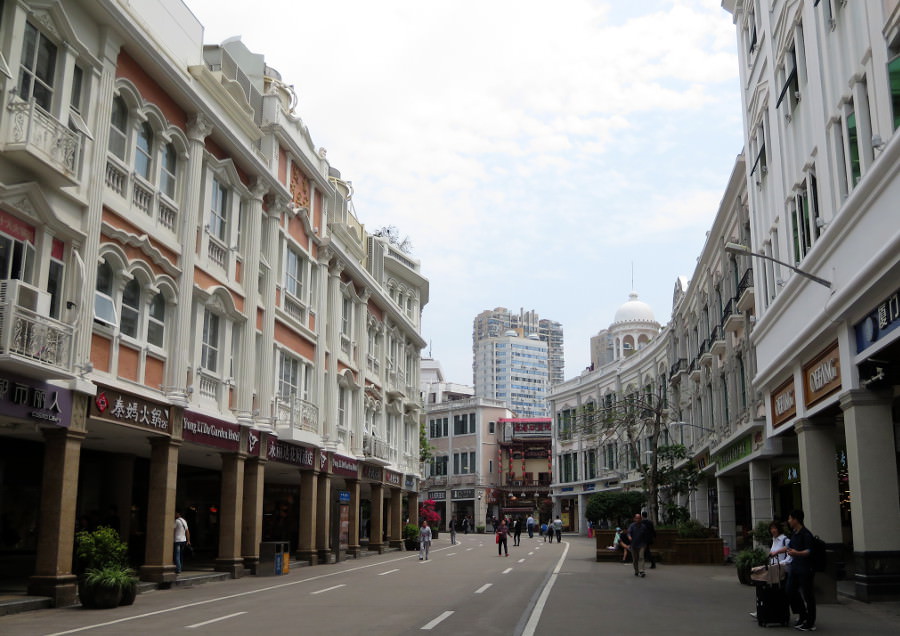 Other times that means stretches of beach that leave you a bit confused. (I’ve mentioned before that I’m not a beach person …) 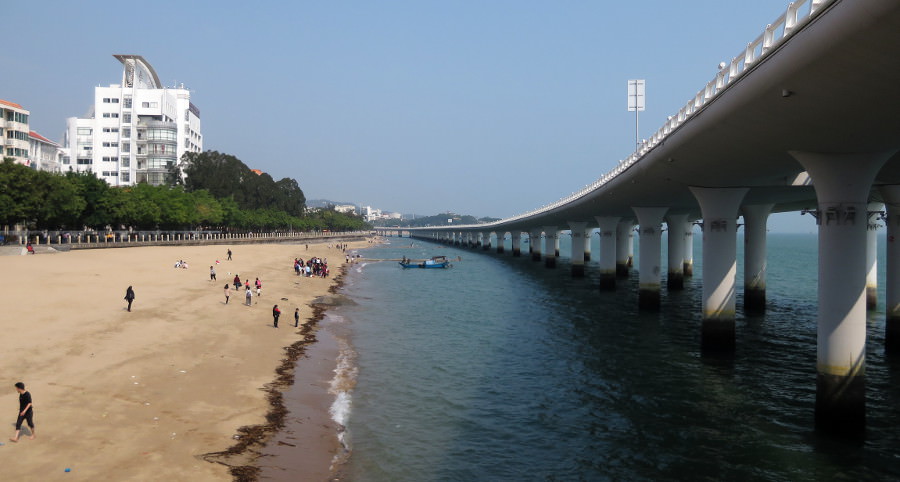 The public beach—next to the freeway. At least you can always find a shady spot.

And if you’re not of Chinese decent, prepare to be stared at. Still, as the ferry to Taiwan pulled away, we couldn’t help but feel we’d discovered some special gem of a city. 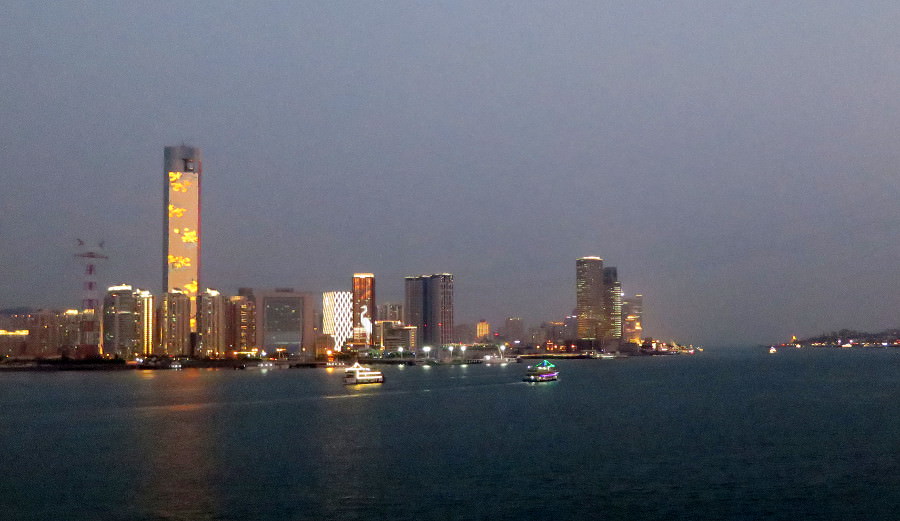 The lights of Xiamen at dusk as seen from the overnight ferry to Taiwan.