Hong Kong is one of the most densely populated cities on the planet. But it also has over 250 islands. With a month-long stay planned, we knew exploring a few of them was essential. I expected the islands to feel completely different from the urban core. But I didn’t expect them to feel so different from each other. Here are the highlights of our visits to the Hong Kong islands of Lantau, Cheung Chau and Lamma over one week in March.

A Long Weekend on Lantau

The most famous site in Hong Kong is on Lantau. The Po Lin Monastery and Tian Tan Buddha (also known as the Big Buddha) are usually seen on a day trip.

We enjoyed our time in Tai O village more, a place known for its stilt houses and shrimp paste. As the largest island in Hong Kong, Lantau boasts its own long-distance trail: the 70-km Lantau Trail loop. We sampled a short section just before sunset up to the appropriately named Sunset Peak. 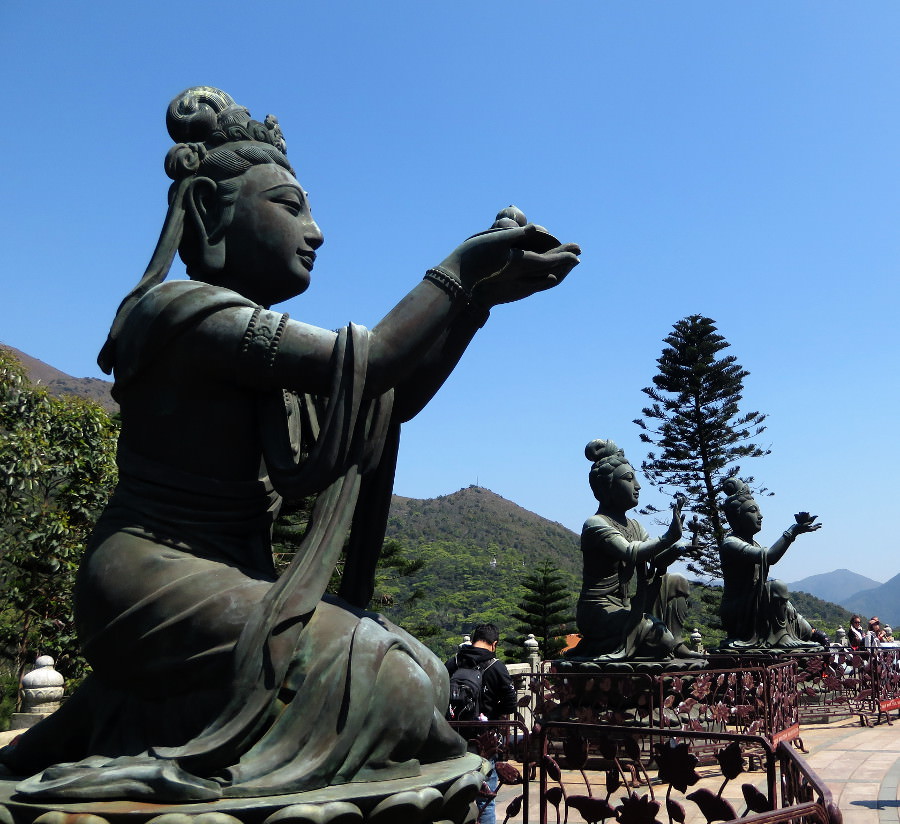 Tian Tan Buddha is visible from far away but his six attendants can only be seen by climbing the stairs to the top. 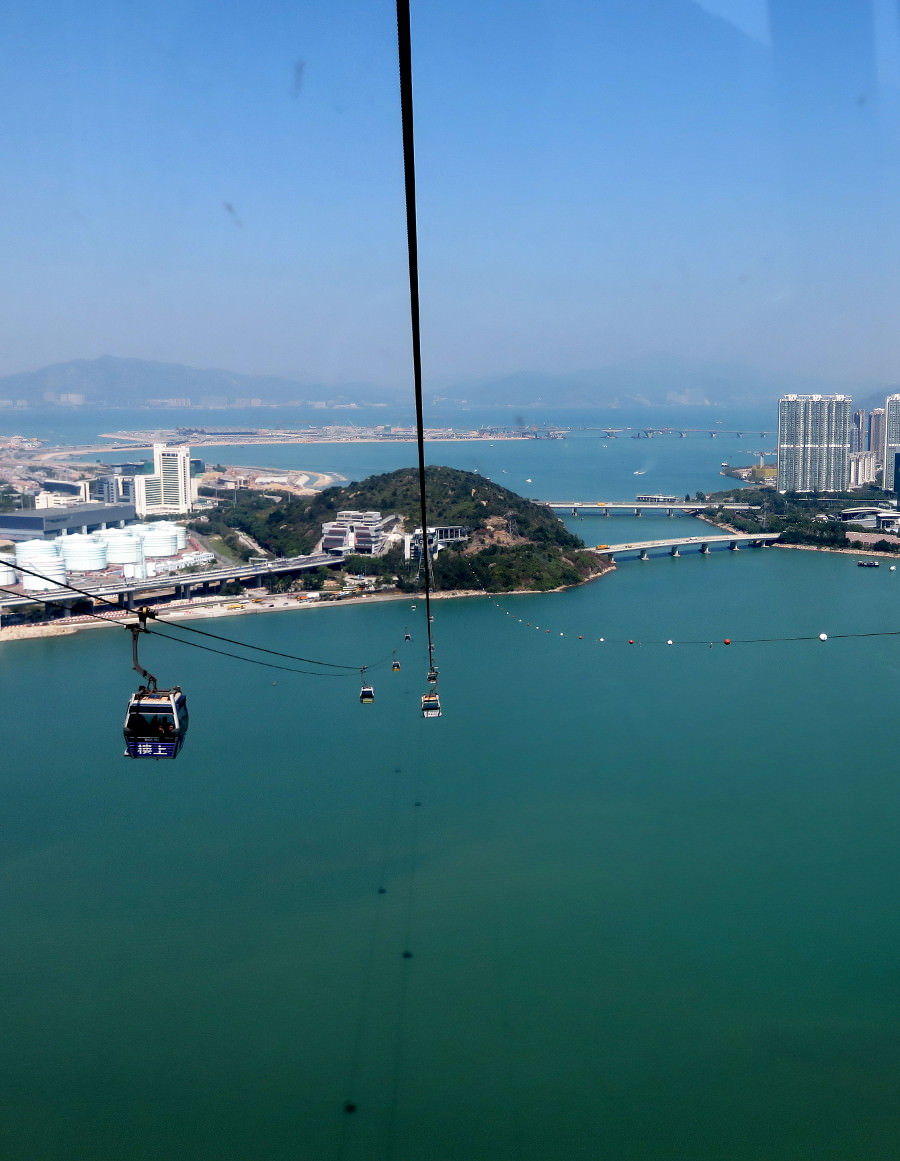 We saved time and money by taking the local bus up and the gondola down from the Big Buddha on Lantau. Hong Kong International Airport is visible on the left. The New Territories are in the background. 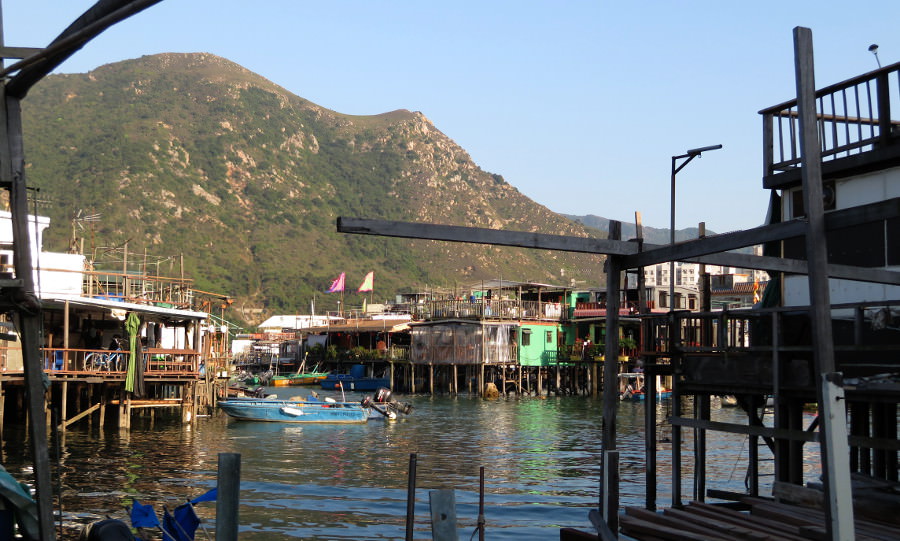 The stilt houses of Tai O fishing village on the Hong Kong island of Lantau. 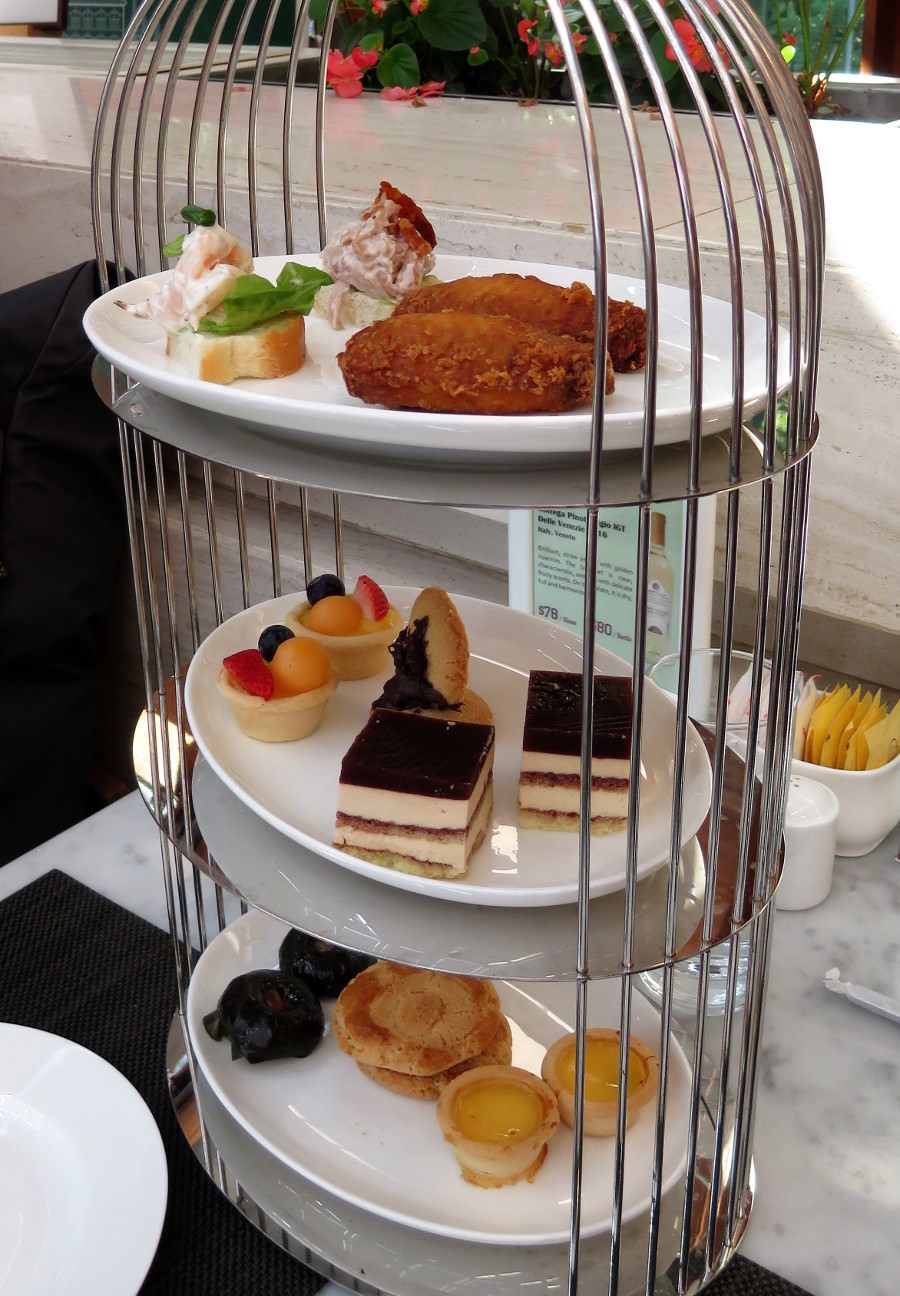 The afternoon tea set at the Tai O Heritage Hotel on Lantau included local ingredients, like Tai O shrimp paste and Mountain Begonia, but no tea.

I had it in my mind that afternoon tea was a must-do before leaving Hong Kong. The problem is most are expensive teas at chain hotels. The Tai O Heritage Hotel offers an affordable tea in a restored historic police station. The tea set was unique—as Matt pointed out, where else will we have chicken wings at afternoon tea? But needing to ask for tea seems absurd. I did, and it was tea bags. Huh? Still, I did love the salty lemon cookie. In the end, it was memorable and I guess that’s the point.

In any case, 15 minutes later I was snacking on dried squid chips and frozen pineapple rings. I can’t say that those weren’t just as tasty.

On Lantau island, the buses are frequent but packed and often won’t even stop for you. After four nights on Lantau, Cheung Chau felt liberating. With no cars on the island, we could walk anywhere. Still, we had to watch out for the steady stream of bikes, scooters and motorized carts. The island is famous for two things: the Pak Tai Temple and Cheung Chau buns. The two are actually related—the yearly bun festival is held in front of the temple. 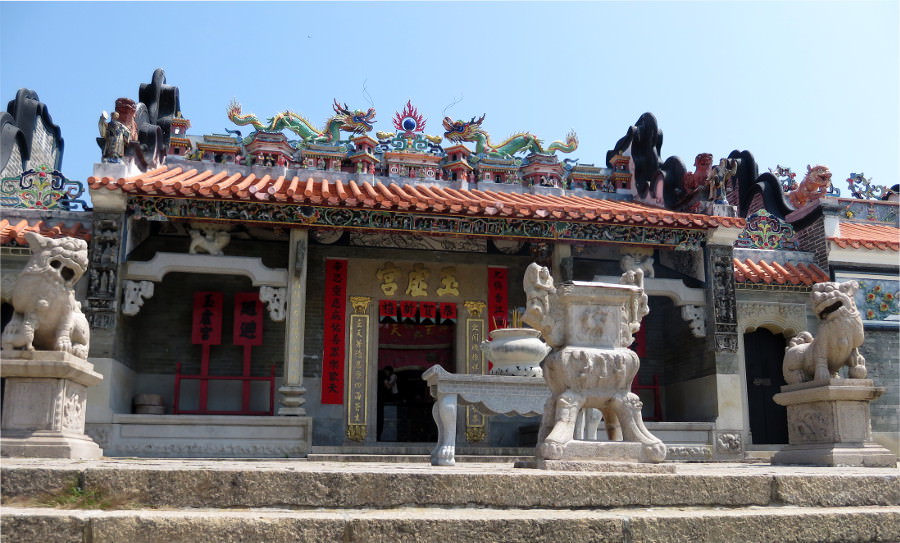 Pak Tai Temple on the Hong Kong island of Cheung Chau. The temple is the site of the famous Cheung Chau Bun Festival in May.

While we were too early for the celebrations, we saw replicas of the 60-ft towers at the Hong Kong Museum of History. These bamboo towers are erected for the festival and completely covered in buns. Until recently, locals raced up the towers to grab buns during the bun scrambling competition. Fortunately the Cheung Chau buns are available year-round. More than the other Hong Kong islands, Cheung Chau is known for its food, such as fish balls, mango mochi and the sheer number of dessert shops.

Besides snacking, we did our own informal Tin Hau pilgrimage. Hong Kong has more than 100 temples associated with Tin Hau. Cheung Chau itself has four temples dedicated to the famous goddess—that’s on an island of less than 1 square mile. For comparison, the whole US only has three (all in California). For more about Tin Hau, see Matt’s drawing of the temple attendant. Use the code word linmoniang to unlock the story. 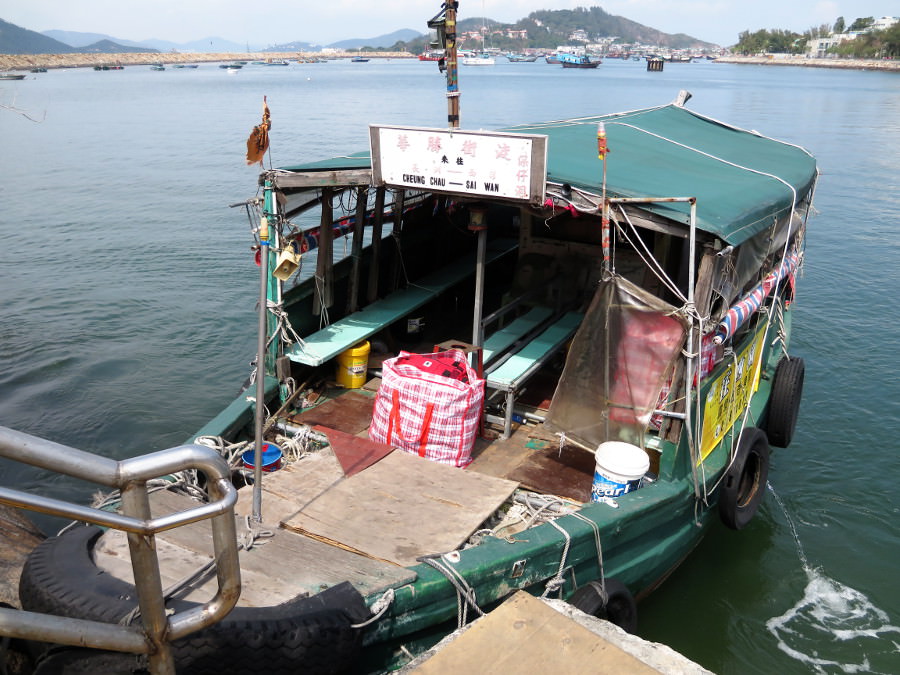 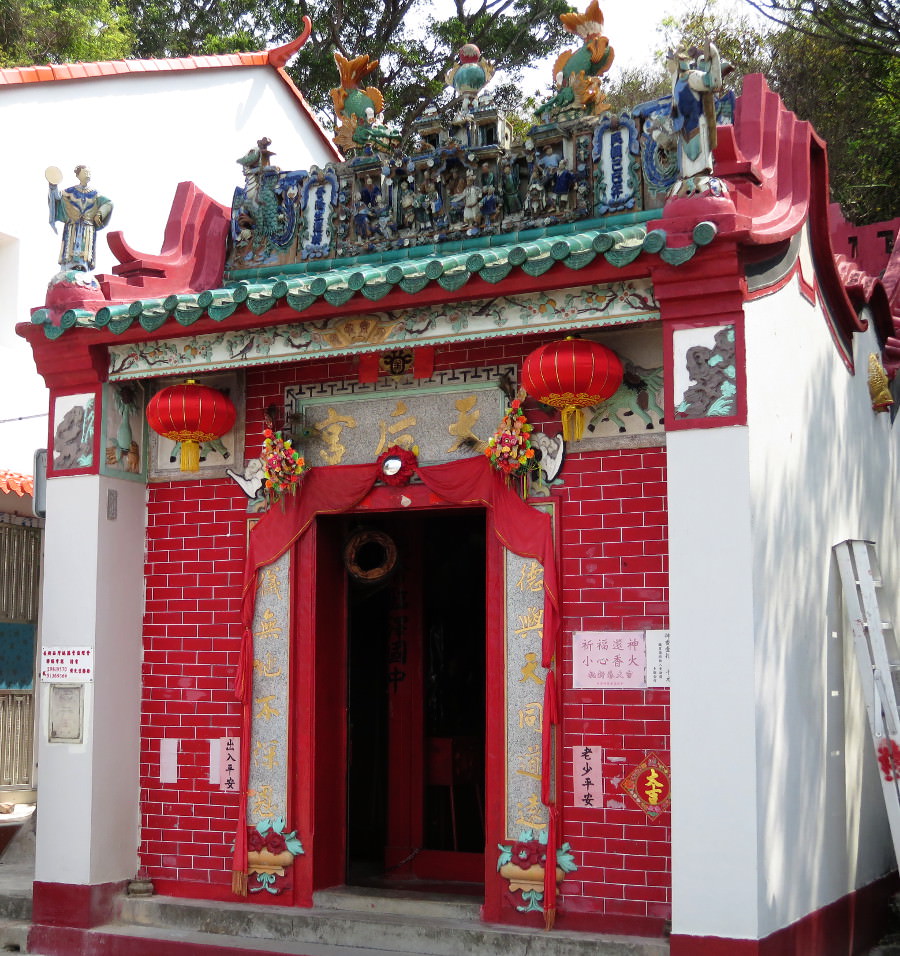 Sai Wan Tin Hau Temple, one of four temples dedicated to Tin Hau on the Hong Kong island of Cheung Chau. This temple is not the oldest on the island, but its location overlooking the channel is fitting for the protectress of seafarers.

A Day Trip to Lamma

Lamma is a convenient day trip from Hong Kong Island. Like Cheung Chau, it is also pedestrianized. There is a popular walking path between Sok Kwu Wan and Yung Shue Wan. These two villages both have ferry service from Aberdeen. Along the route are beaches, lookouts and snack shops. My guess is a trip to Lamma is best appreciated as a respite from the flurry of Central or Kowloon. After the other two Hong Kong islands, Lamma felt more touristy and crowded. 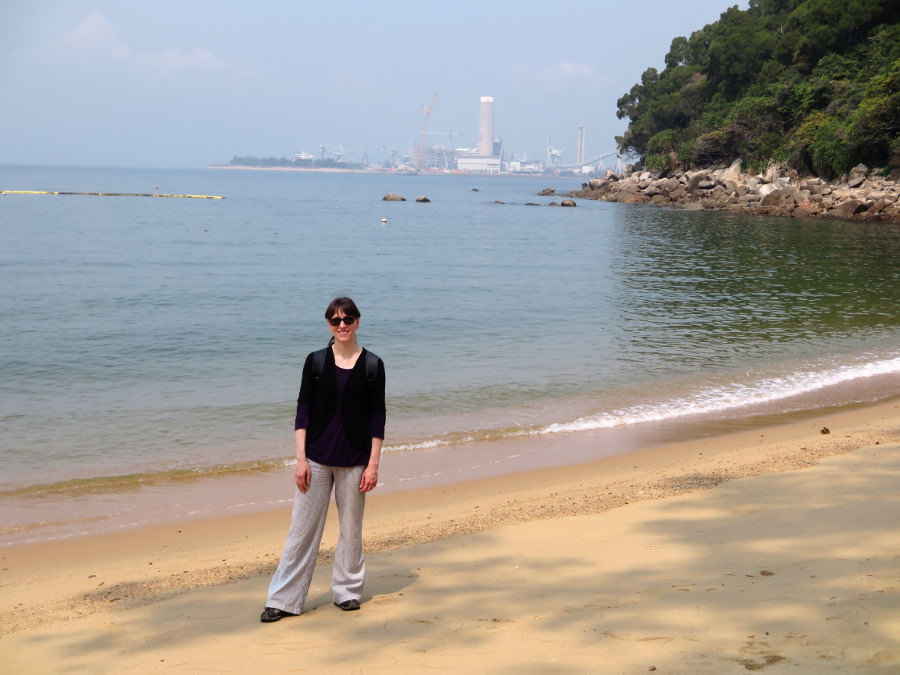 Described in my guidebook as “the most beautiful stretch of sand on Lamma”, we were surprised to find the view included the power station. Not being beachgoers, perhaps we don’t know what makes a good stretch of sand? 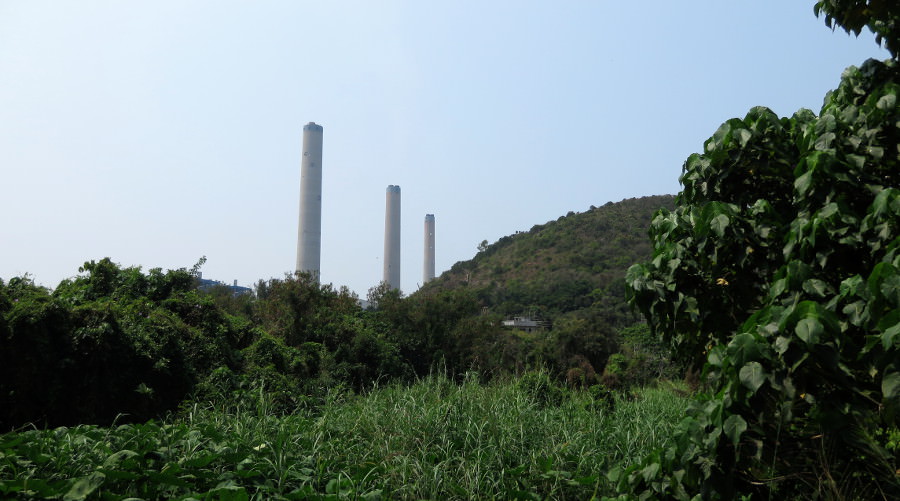 Although Lamma boasts one large wind turbine, the conventional power station is an omnipresent sight while walking the Lamma Island Family Trail in Hong Kong. We even saw it across the water from our room on Cheung Chau, one of the other Hong Kong islands we visited.

Still it’s one of the Hong Kong islands. So of course there are more Tin Hau temples to explore. 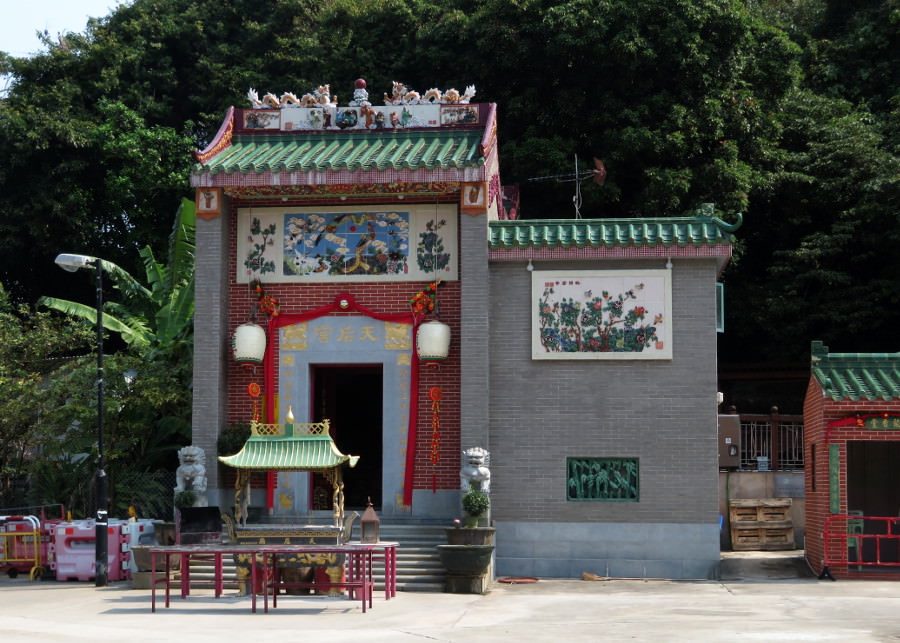 Tin Hau Temple in the village of Sok Kwu Wan on the Hong Kong island of Lamma. Unlike many Tin Hau temples, this one is not graded for conservation by the Hong Kong government, but the intimacy of the setting made it one of our favorites. The temple also houses a giant oarfish specimen—the world’s largest bony fish—which was found in the waters nearby.