In most people’s minds, hiking does not top the list of activities for Hong Kong. I was no different; it didn’t even occur to me to look up hiking trails. But soon after I began planning, I found a government site devoted to this popular pastime. That’s when I first learned about the four long distance trails in Hong Kong. These long trails range from 50–100 km, divided into 8–12 sections. Perhaps some day we will tackle all (or at least one) of them. But for this trip, I’m satisfied we could sample each one on day hikes throughout our month-long stay.

This shortest of long trails in Hong Kong starts at one of the city’s most famous sites: Victoria Peak. We avoided the crowds by hiking up the Morning Trail, which intersects with Section 1 of the Hong Kong Trail. The trail is by no means quiet—every Hong Kong local recommends it. Still, the tourist circus at the end of the tree-lined trail was jarring. We had lingered along Lugard Road, enjoying the views and interpretive information. But we descended down the steep Old Peak Road right after reaching the tramway. Again we were back among the trees and relative solitude, although my toes weren’t too happy about my choice. 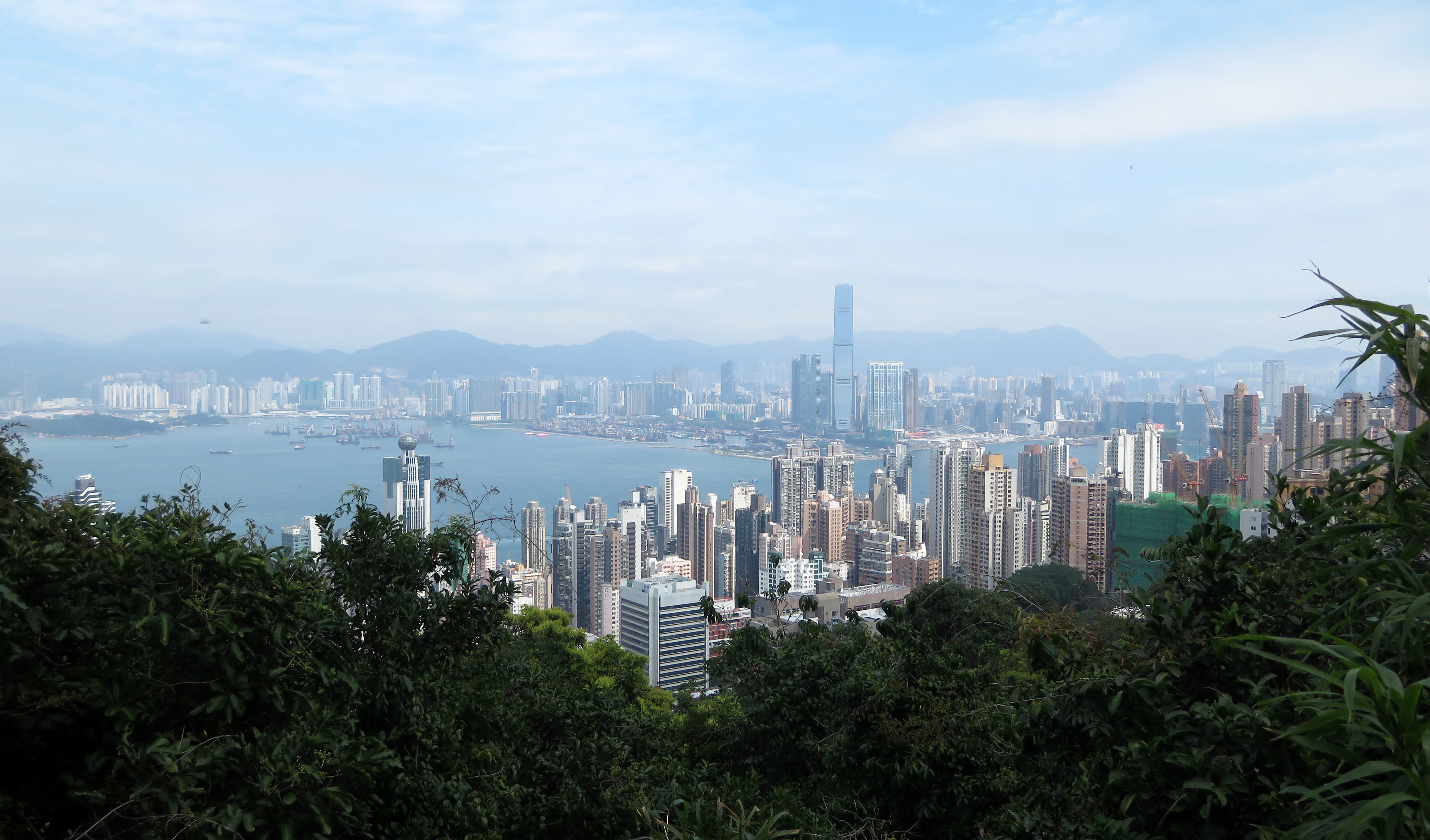 The Hong Kong skyline as viewed from Lugard Road on Victoria Peak, part of Section 1 of the Hong Kong Trail. 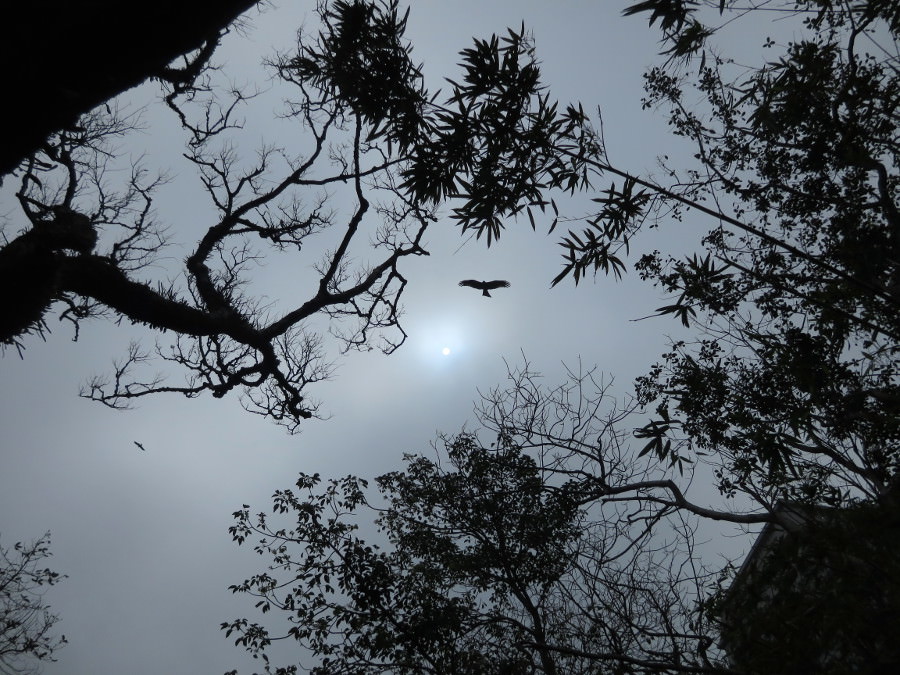 Lugard Road on Victoria Peak, part of the Hong Kong Trail Section 1, is also part of the Pok Fu Lam tree walk. As the name suggests, this trail is a great place to see Hong Kong’s flora and fauna.

A couple days later we hiked the final section of the Hong Kong Trail. Section 8, also called the Dragons’ Back, is likely the most famous of trails in Hong Kong. It leads to a ridge with spectacular views (or so I’ve heard). I can only speak for the close-in details of the vegetation and the moody atmosphere the fog provided. Oh, and the delicious coconut at the end of the trail in Big Wave Bay. 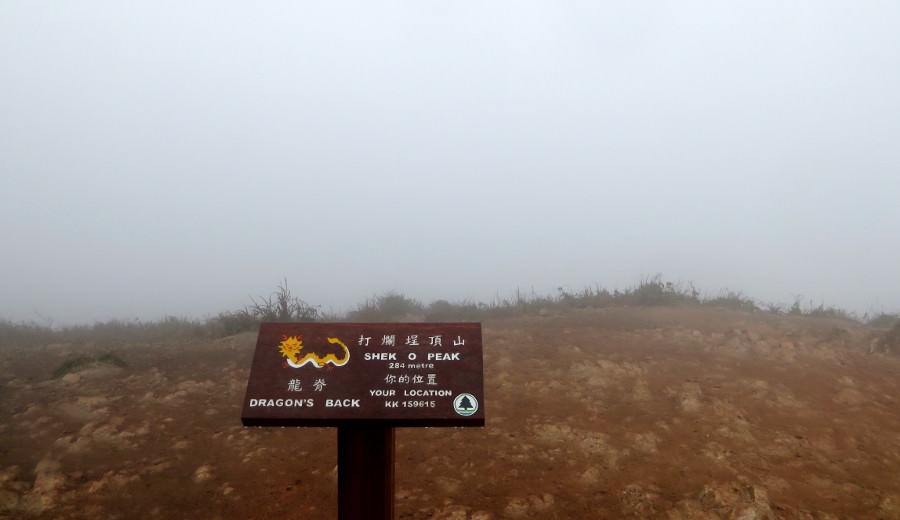 Beautiful views of the surrounding waters and coastline are often seen from the summit of Dragon’s Back Trail in Hong Kong. But on this day in late February, all we saw was a thick blanket of fog. 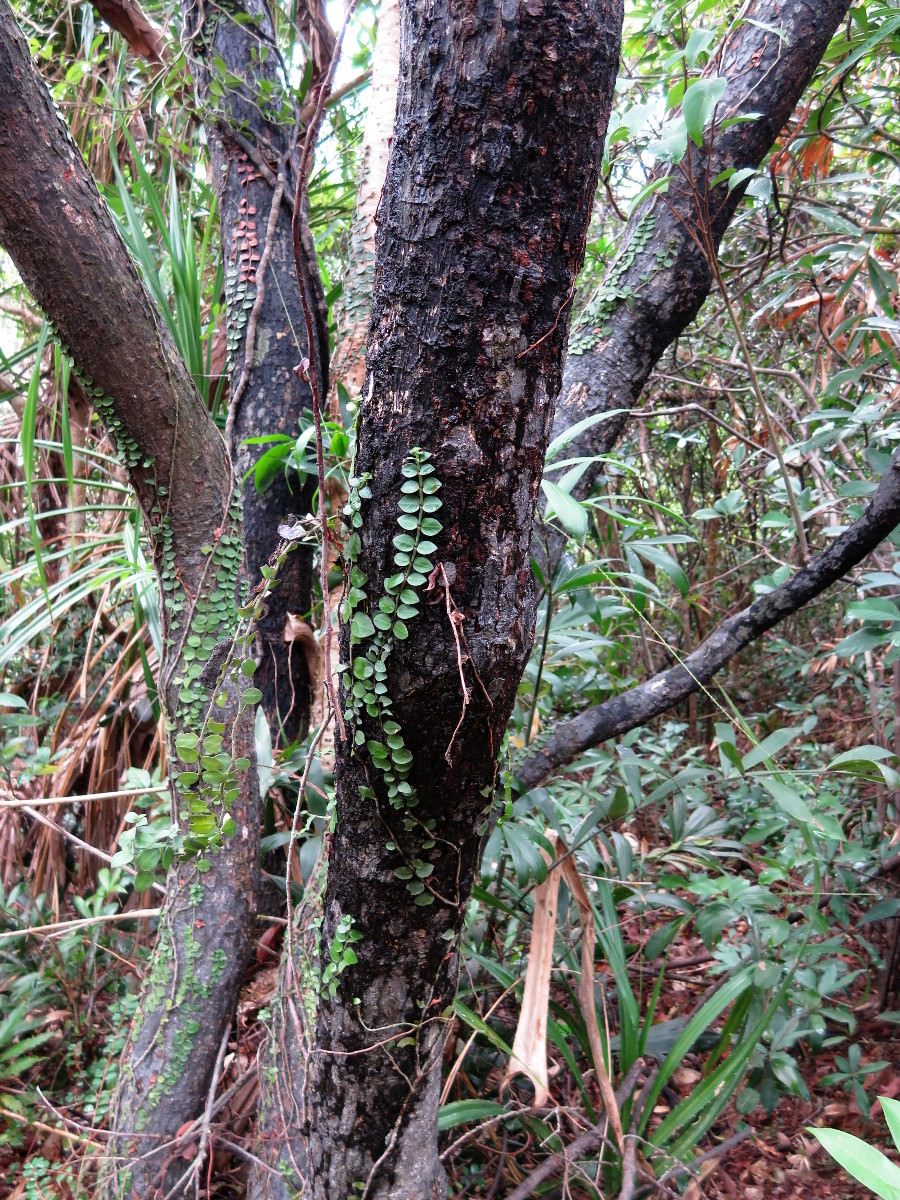 Many trees along trails in Hong Kong support vining vegetation.

It was a lazy Sunday afternoon. We were sitting and drinking coffee at a beachside restaurant along Cheung Sha beach. We had walked there from our room in Tong Fuk village, but I didn’t feel like walking back along the road. I knew it was our last chance to hike on Lantau. Still, I was feeling apathetic. We walked to the bus stop. If a bus to the trail came soon, we would get on it. Otherwise, we would head back.

Ten minutes later we were on the bus, and another 10 minutes after that we were at the trailhead. This was Section 2 of the Lantau Trail up to Sunset Peak. How appropriate sunset would be in less than 90 minutes. We hurried up the trail—a constant upward grade with steps made of varying heights and widths. We had eaten all our snacks earlier in the day; our water was running low. The hiker’s list of 10 essentials popped into my mind. Well, I had at least five of them: laptop, iPad, hotspot, phone, and camera. Er, maybe not. But I did have a map, actually two maps. Not because of some great forethought. Rather, because I always have maps. (In my own defense, of the 10 essentials, my own belief is a map is the most essential.) 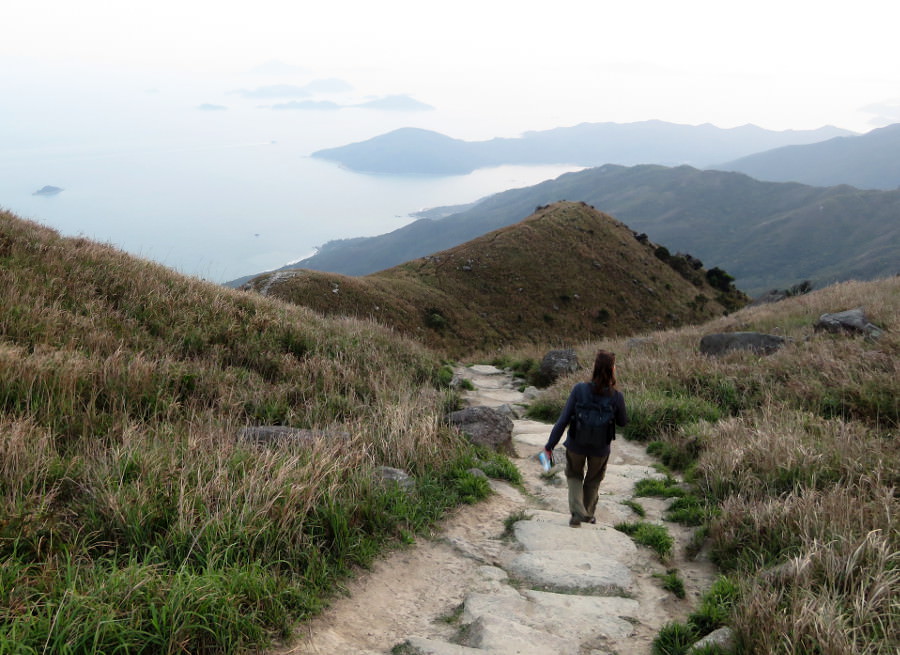 Heading down from Sunset Peak shortly before dark on Section 2 of the Launtau Trail in Hong Kong.

Fortunately, we didn’t need any of the things we were missing. We made it to the peak with beautiful views of nearby Lautau Peak and the surrounding islands. It was too cloudy for much of a sunset. We made it back to the trailhead shortly after our light was gone. I used a flashlight for the final uneven steps down the trail, while Matt perfected his night vision. And ten minutes later, we were back on the bus.

Of trails in Hong Kong, the Wilson Trail is the only one that covers parts of Hong Kong Island, Kowloon, and the New Territories. We hiked Section 1 on Hong Kong Island, which ends (or starts) near the seaside town of Stanley. The trail is scenic since it crosses over The Twins, the highpoint of Section 1. It was a humid day so we were thankful for the cloud cover even if it meant sacrificing some of the views. 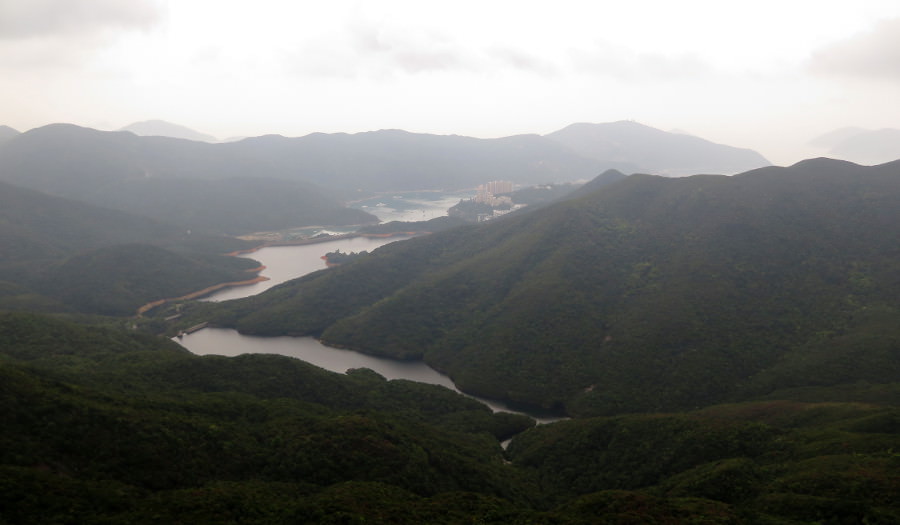 Views of Tai Tam Reservoir from Section 1 of the Wilson Trail on Hong Kong Island.

We could even see Dragon’s Back ridge since this section of the Wilson Trail is along the adjacent peninsula. Ultimately though, the views proved less memorable than the grade. At more than 1,000 steps up and down—the stairs were numbered so no need to count—we were sweating in the humidity and heat. 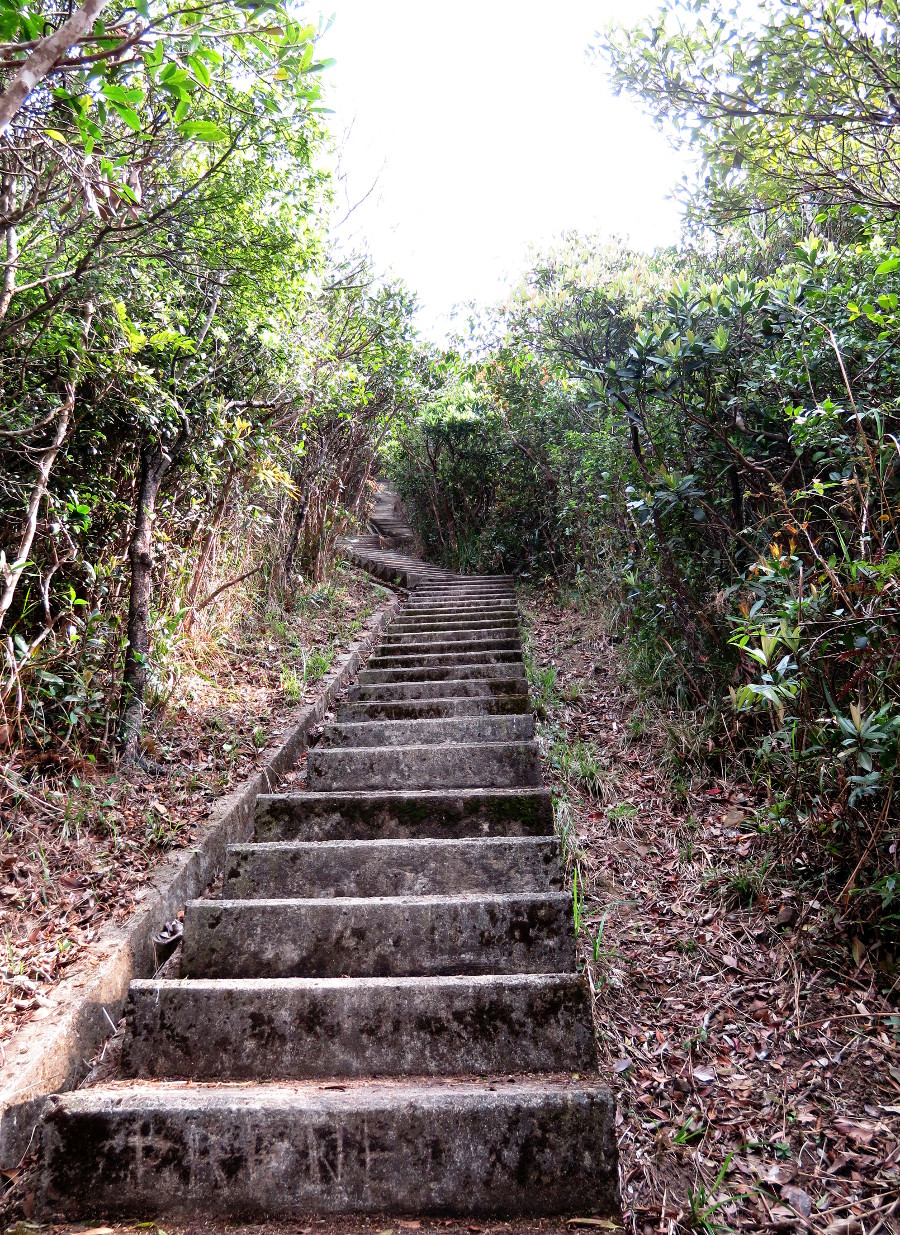 Many trails in Hong Kong have lots of steps to deal with the steep terrain. But Section 1 of the Wilson Trail seems to have an endless flight of stairs leading up to The Twins.

The MacLehose Trail is the longest and most remote of the long trails in Hong Kong. In truth, we never planned to do any of it. I had read about it and heard it mentioned, especially the sections in the Sai Kung area. But it’s relative inaccessibility convinced me to put it off until another visit. So when we agreed to meet up with a friend’s brother and his girlfriend Sunday morning, I felt conflicted. I knew we should jump at the chance to join these new friends on an outing I lacked the energy to organize. But 7:30 AM? (Have I mentioned I’m not a morning person?)

I’m glad to say we rallied. We ate a quick breakfast at 7, caught the bus at 7:20, and were waiting at the metro stop before 8. It was a long journey for a day hike. First the metro ride, then a minibus to Sai Kung and finally an expensive cab ride. Our final destination was the East Dam of the High Island Reservoir. While this last leg of the journey is Section 1 of the MacLehose Trail, it would be inaccurate to say we hiked it. Rather, we appreciated the same views we would have seen while hiking. (Although the hike we chose did require us to walk a short piece of Section 1 at the end.) 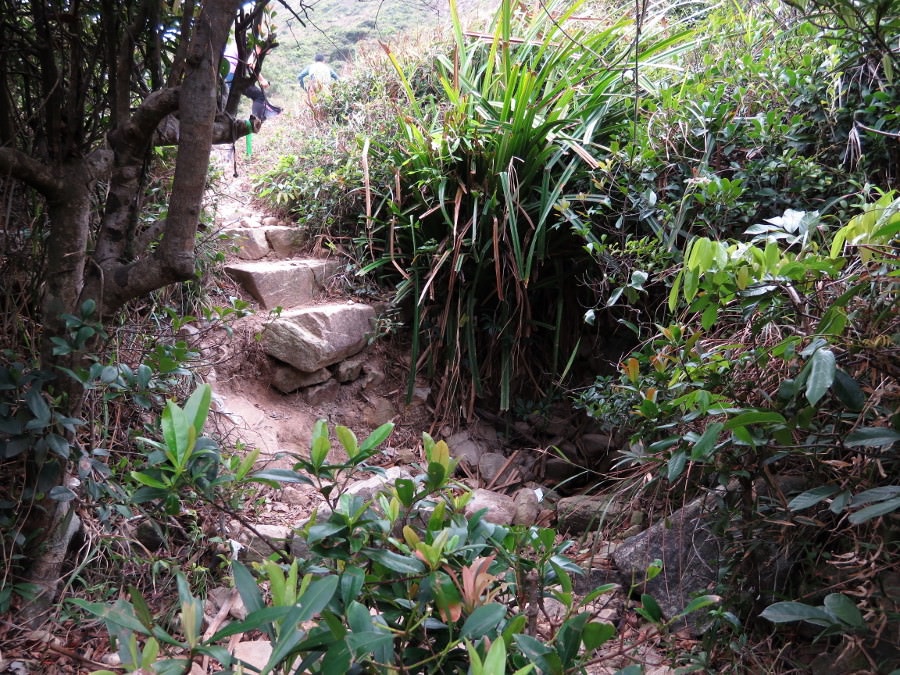 Parts of the loop trail around Fa Shan peak in the Sai Kung area of Hong Kong have quite rugged terrain.

Instead, we hiked a loop trail around Fa Shan peak. The highlight was close-up views of Po Pin Chau, an island separated from Fa Shan by weathering and erosion. The area is famous for the striking rock columns formed by volcanic activity. The terrain was the most rugged we’ve encountered on trails in Hong Kong. A couple short but steep sections even had a rope provided. Shortly before the junction with the MacLehose Trail, we came upon our final beach of the hike. Camping supplies, toilets and a small restaurant were reminders that civilization was near. We enjoyed our lunch before returning to Sai Kung to spend the rest of the afternoon at a farmers market and an outdoor bar. 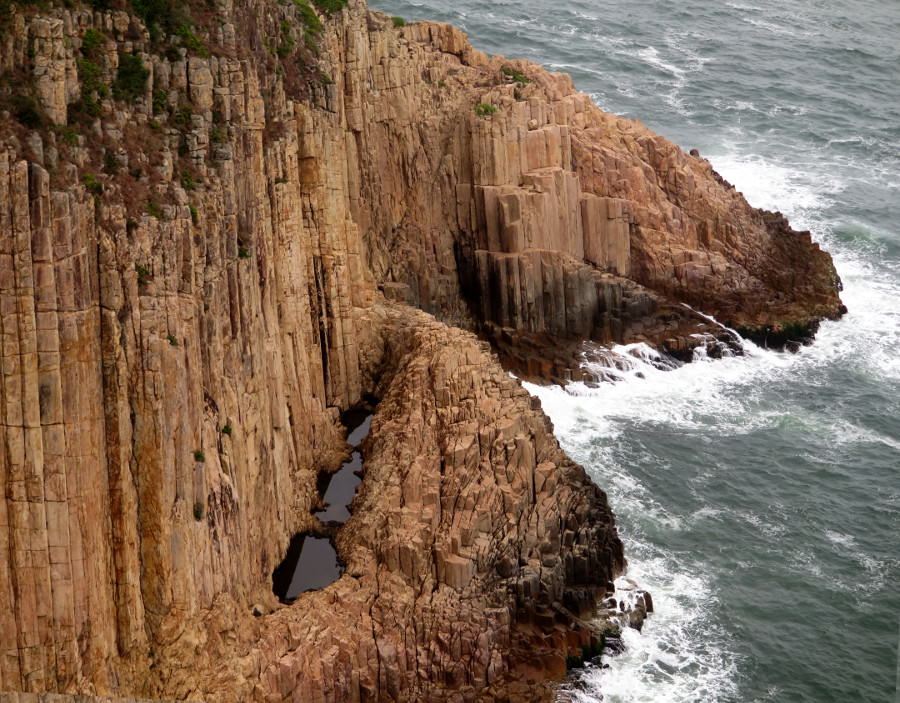 A close-up view of the columnar rock face of Po Pin Chau near the end of Section 1 of the MacLehose Trail in Hong Kong.

Why Hike in Hong Kong?

It’s fascinating to me that one of the most densely populated areas of the world has so many hiking trails. The contrast between urban core and accessible wilderness must be a rarity in the world. I will forever be amazed by the reality of taking public transit to go hiking. The appeal of facilities and food, in particular, at the end of a sweaty hike is undeniable. But the other side to this ease is even when the remoteness felt real, we were never alone. And I was sometimes appalled by the amount of garbage we saw, especially at beaches. So while I love that Hong Kong has no suburbs–it’s either relentlessly urban or markedly undeveloped–solitude and unspoilt nature are not it’s strengths. Still, one of the beautiful things about Hong Kong is even if you only stay within the urbanized areas, nature is everywhere.