We spent a month in Hong Kong. I’m sad to say I made it to only one farmers market during that time. But it wasn’t for lack of trying. While wet markets hover around 100, there are less than ten Hong Kong farmers markets. This was a surprise since my own city of Seattle has at least that many weekly markets—some of which even run year-round. One of our last days in Hong Kong, we went out to Sai Kung to hike with friends. We finished early enough in the afternoon to make it back to Sai Kung Town in time for the Sunday farmers market. I was excited to finally make it to one of the Hong Kong farmers markets. Even more so because Sai Kung’s is an organic market.

The Sai Kung Organic Farmers Market is smaller than I expected with less than eight stalls on the Sunday we visited in March.

I won’t say it was a letdown. But it wasn’t exactly what I was expecting either. To be fair, for someone wanting to cook regularly with local foods, there was plenty of variety to choose from. But as a comparison to Hong Kong’s wet markets, the selection was underwhelming. 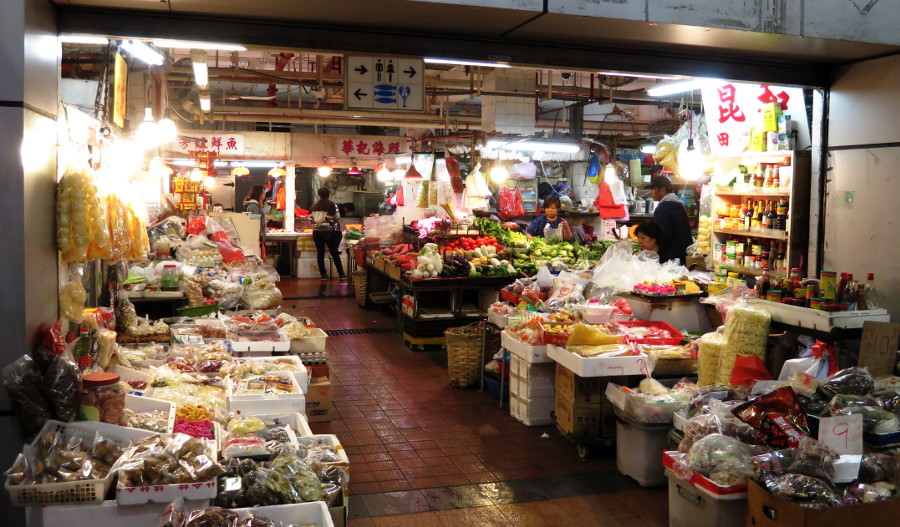 Does Hong Kong Have Local Foods?

I had been skeptical about the existence of a local food scene in Hong Kong before my visit to Sai Kung. We always searched produce for stickers identifying origin. I never found one that said Hong Kong. In stores, I also looked at everything we bought. Organic eggs from Denmark, yogurt from Australia, and muesli from France. In truth, I don’t know the origin of the vast majority of what we ate. Language issues aside, I asked where things were from when I could. The responses? Dragonfruits from Vietnam, mangosteens from Thailand, guavas from Taiwan, and greens from China.

It wasn’t until one of our last days that we finally heard Hong Kong as the answer. And it was twice in the same day. I bought passion fruits from a woman who said she grew them herself (that’s all she was selling). Later on, we saw a narrow stand near the Wan Chai wet market that sold produce from a farm in the New Territories. I snatched up some fresh mulberries. I was thrilled to have found one, local produce, and two, a fruit I’d never had before. 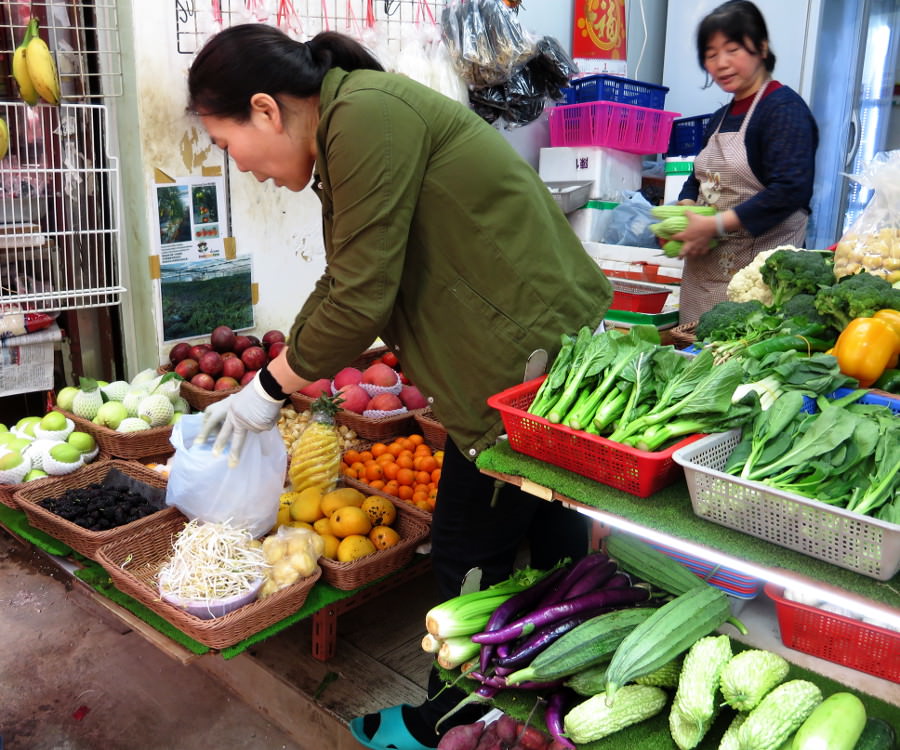 This farm stand selling local produce grown in the New Territories was not in the Hong Kong farmers markets, but along a street near the Wan Chai wet market.

Aside from this small win, the rigid dedication to local foods that I advocate at home was being tested here. To me, local means grown in Washington State. But here, my idea of local began to include Southeast Asia and China. Hey, at least it’s in the same continent, I thought. Before leaving, I had made the assumption the locavore movement was prevalent elsewhere. Sure a niche, not mainstream, but present just the same. Like artisan coffee and craft beer. Yet as a visitor, I found it so much harder to access local foods than I had imagined. So I did what I could and didn’t worry about what I couldn’t do. 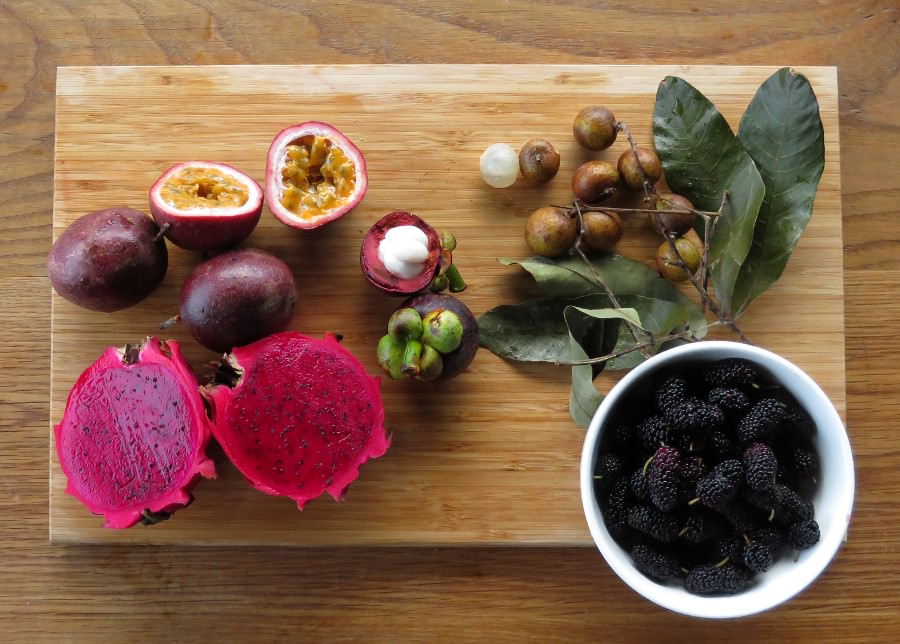 A selection of the spring fruits available in Hong Kong: local mulberries and passion fruits, and imported dragon fruits, mangosteens, and longans.

It was a good lesson. In Seattle, it feels simple to eat seasonal and local foods. (Don’t even get me started about how ridiculously easy it is in California.) But my futile search for Hong Kong’s local foods is a reminder that what’s straightforward for me may not be for others. Fresh fruits and vegetables can be worth celebrating, even if you have no idea where they’re from. 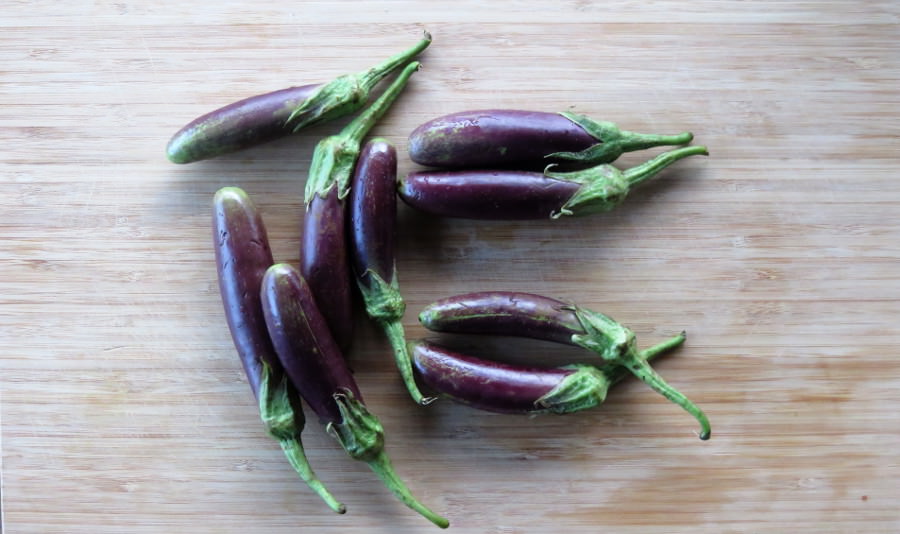 Japanese eggplants bought from a street stall near the Wan Chai wet market. I have no idea where they were grown.