In my first post about Taiwan, I said I liked (and disliked) many things. But my strongest memories of the country revolve around food. Local fresh fruit. Street markets. Night markets. Chinese food. Taiwanese food. Japanese food. Coffee. Tea. Tofu pudding. Shaved ice. It was like eating something for the first time that immediately felt familiar. It was comfort food, even though you’d never had it before. I talked up the food in Taiwan without giving many examples. In this post, I aim to change that.

It’s only appropriate to start with night markets. For one thing, as far as food experiences go, it’s the one “can’t miss” activity. (Shaved ice is another, but you’ll find it at night markets if you go to enough of them.) Also, the Hualien night market was one of our first experiences in the country. The one that made us start to fall in love with the food in Taiwan. While I’m still not an expert, we did go to seven different night markets around the country.

To be honest, I didn’t have high expectations. I was disappointed by Vancouver’s over-hyped Richmond night market years ago. But luckily I didn’t let this experience color my decision to check out Taiwan’s night markets. While each has a different feel, one thing was immediately clear at every market: the food in Taiwan is cooked fresh. Sometimes, this means you’re waiting longer than you’d expect. But patience is rewarded when you taste some special snack. Savor the experience, even the warm (sweaty) nights, and the (sometimes) pesky mosquitos. It’s important to remember what seems common at one night market, you might never see again.

A Sample of Night Market Foods in Taiwan 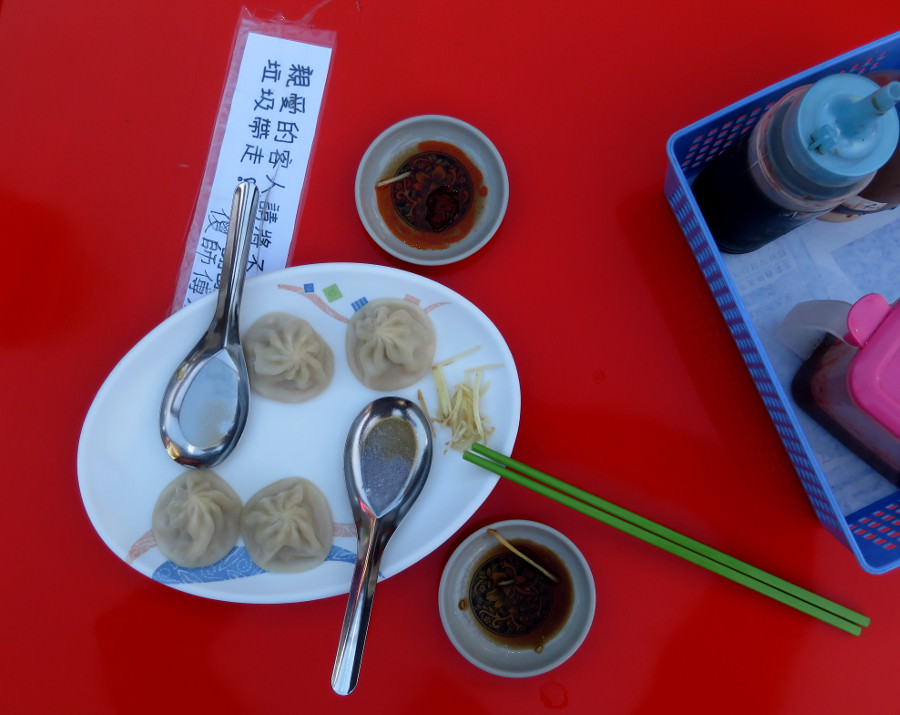 Soup dumplings, or xiaolongbao, are from Shanghai, but Taiwan has made this food famous around the world via Din Tai Fung. I’ve still never sampled the dumplings from this international chain. Why waste money eating this food in Taiwan when there’s one in Seattle? But I can say the dumplings made fresh at the Hualien Night Market are delicious and cheap. 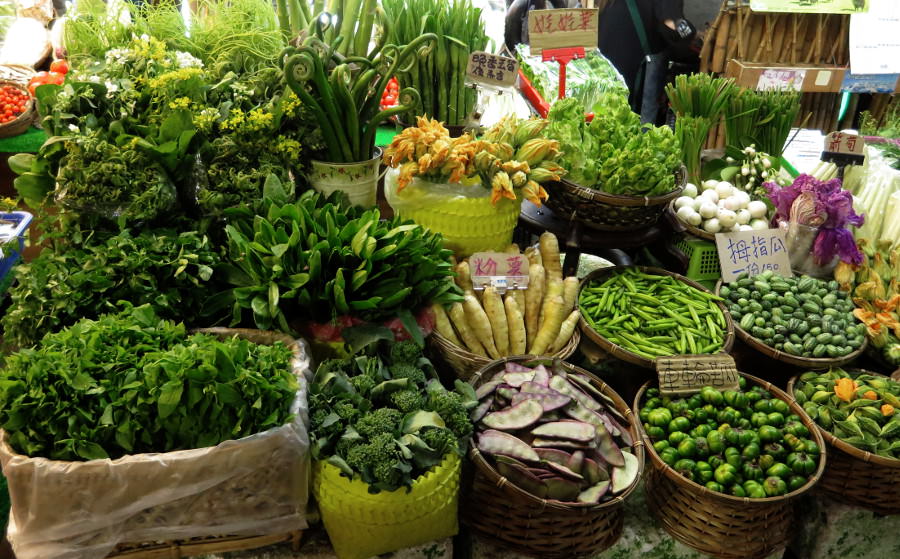 Something I never expected to see at a night market was this bounty of fresh seasonal vegetables rivaling a farmers market. This selection was exclusive to the night market in Hualien and only available at a couple of stands. Place your order, walk through the tiny kitchen to the seating area and wait for your freshly-cooked dishes. 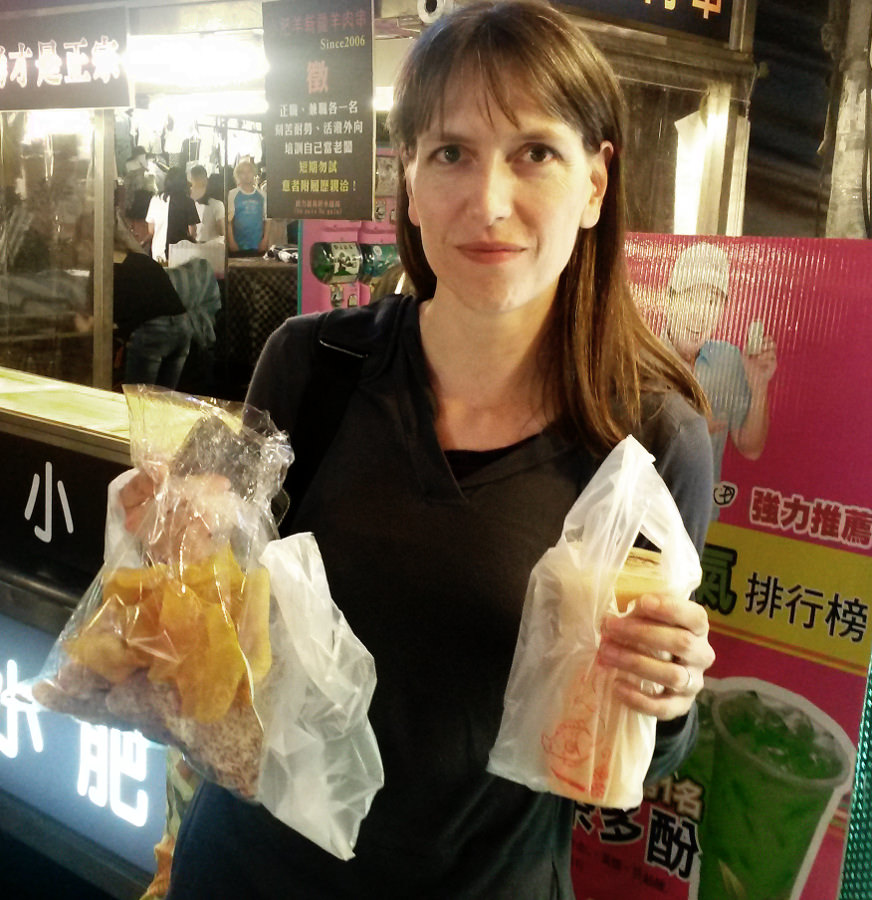 The one problem with night markets? Plastic bags. Why oh why do they use so many of them? This was my first foray into plastic bag collection en masse, but it is not limited to Taiwan’s night markets. Unfortunately, I soon discovered I would be in a constant battle against overuse for the rest of the trip.

I mentioned shaved ice above. But it’s important, so I’ll say it again. When at a night market, or anywhere in Taiwan, look for shaved ice.

Not actually a night market … how could I not include a guy stewing mulberries along the side of a street in Tainan at 10 PM on a Tuesday?

Roasted sweet potatoes from a couple stalls down, followed by fresh mulberry juice. In Taiwan, even laundry night is exciting.

Brunch in Asia is not easy to find. When you do, it looks like some Western god-awfulness (so not so different than many brunches in the US). The food in Taiwan is an exception. To be fair, I suspect it’s the Japanese influence that has turned Taiwan into a worthy brunch destination. 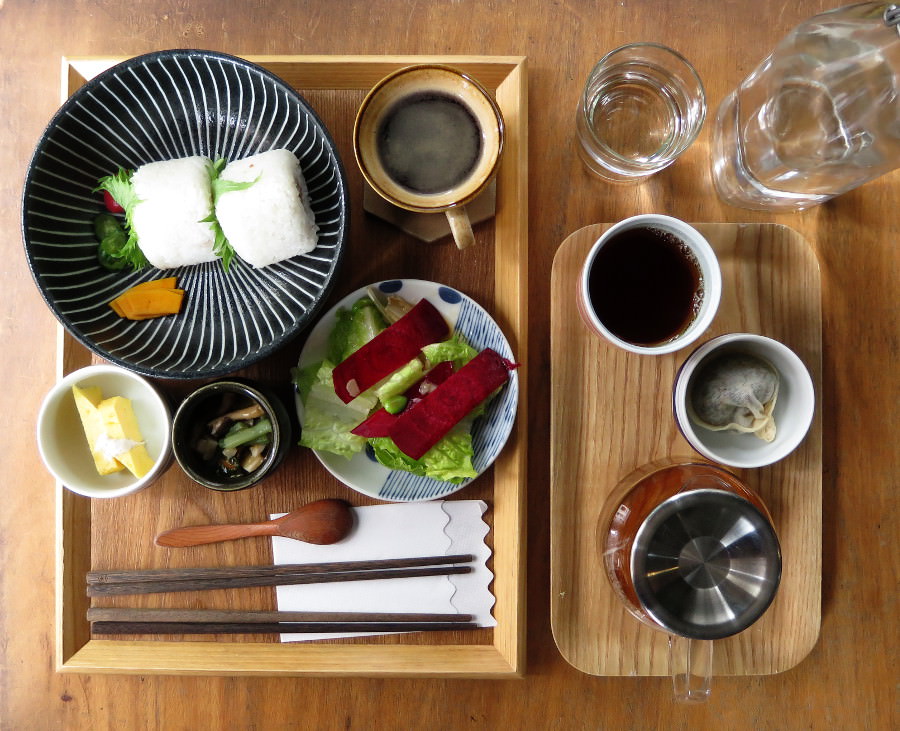 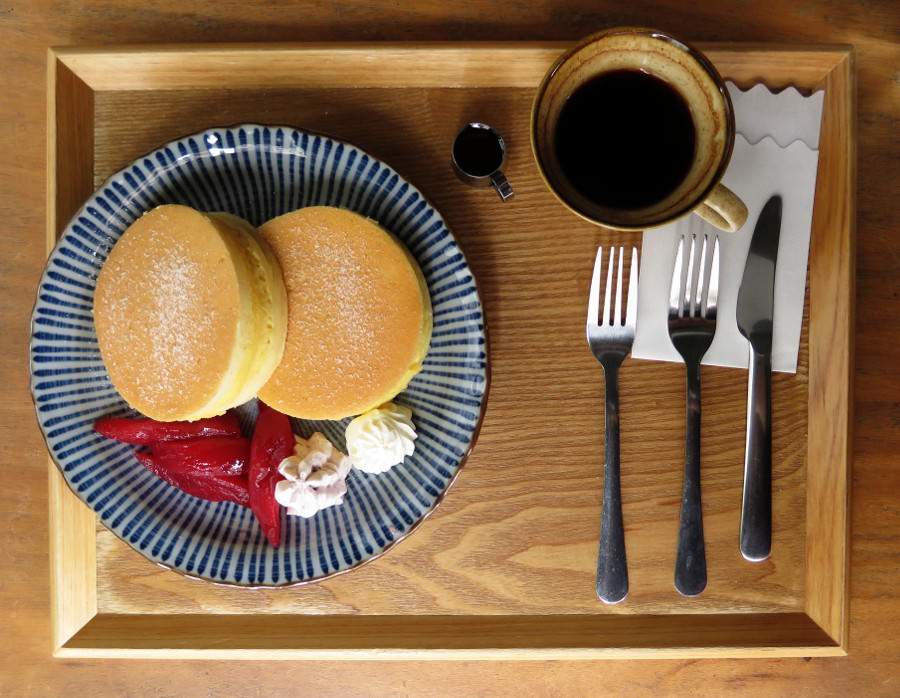 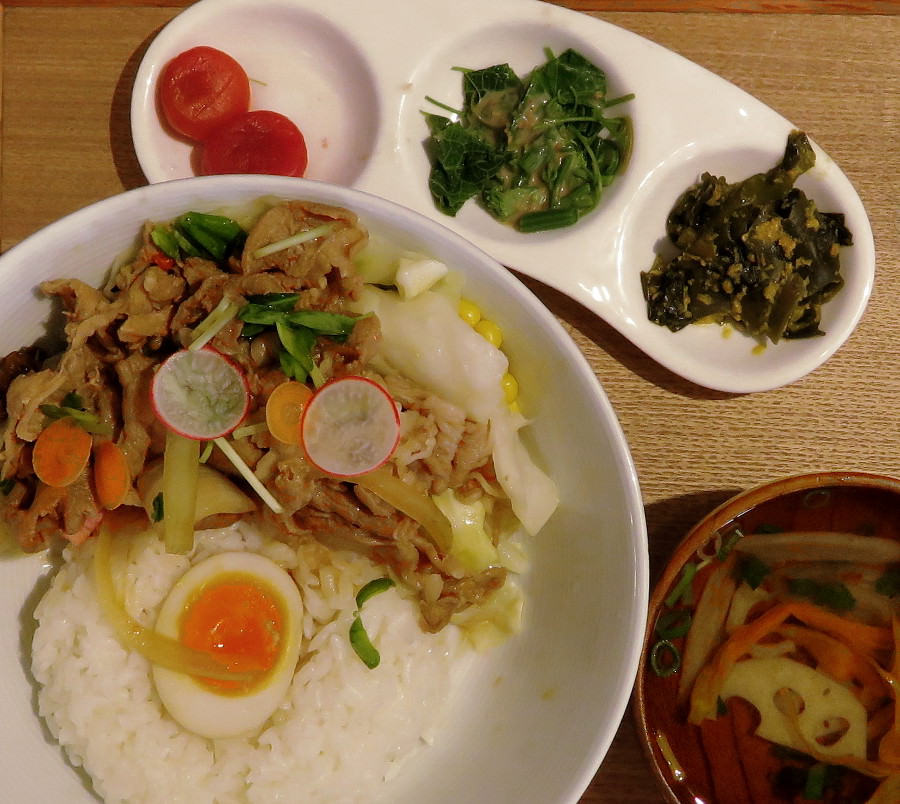 We arrived at Yonshin Tea shortly before it opened and there was already a line. I admit we almost didn’t go in because it was a little expensive and the menu did not sound like brunch. Beef and noodles are just not what I want to eat in the morning. The brunch sets consist of rice or noodles with various proteins as well as side dishes and soup. And they were delicious! You can end the meal with a slice of cake.

For a grab and go breakfast, Taiwan has the best bakery I’ve seen in Asia: Wu Pao Chun Bakery in Gaoxiong and Taipei. It’s hard to get good versions of Western-style breads and pastries in Asia. Often even the savory goods are a bit sweet and whole-grain flours are nonexistent. (If you like soft, squishy bread that still smells freshly-baked, Asia might be your place.) The European-style baked goods with Asian flavors, like red bean or date, were my favorite.

After our experience with farmers markets in Hong Kong (or lack thereof), I’d written them off as a Western phenomenon. I consoled myself by wandering random street/wet markets thereafter. More often than not, this resulted in spotting some exotic food I’d never seen before. The lack of produce markets wasn’t such a big deal because the food in Taiwan was so delicious and easy to find. Still, when we stepped off the bus in Taichung, I was thrilled. Before me was a small sidewalk farmers market in front of a bakery. Days prior, we had made simple breakfasts using staples from the (two!) organic grocers near our Taipei apartment. Still, we relished putting together easy breakfasts during our stay in Taichung. 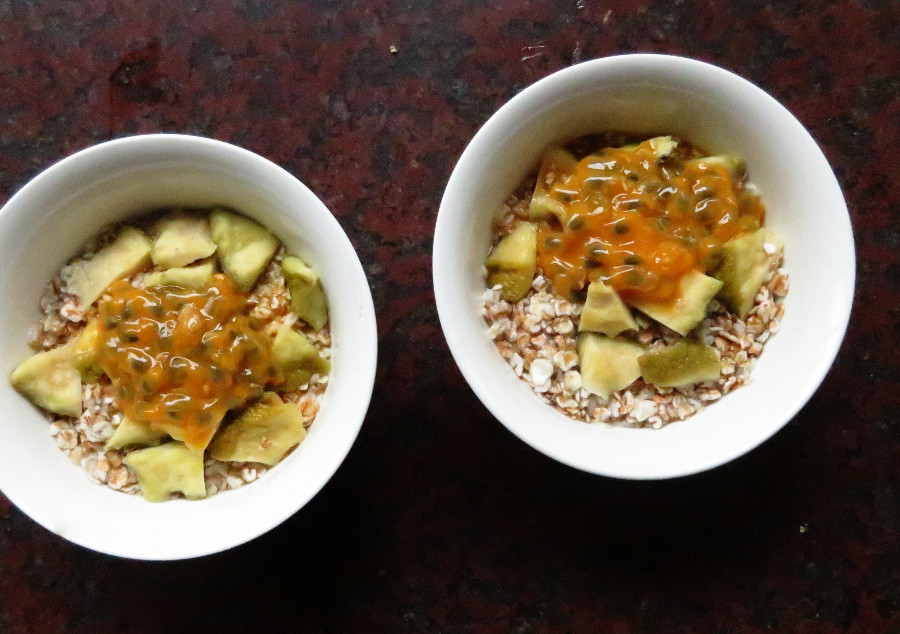 Muesli topped with soy milk, dried guava and fresh passionfruit makes a quick and easy breakfast. We bought the muesli and soy milk at specialty shops in the Da’an district of Taipei. We bought dried guava (as well as dried pineapple and cashews) from one of the shops that hand out samples along Dihua Street in Taipei. The fresh passionfruits came from the street market near Yongchun station. 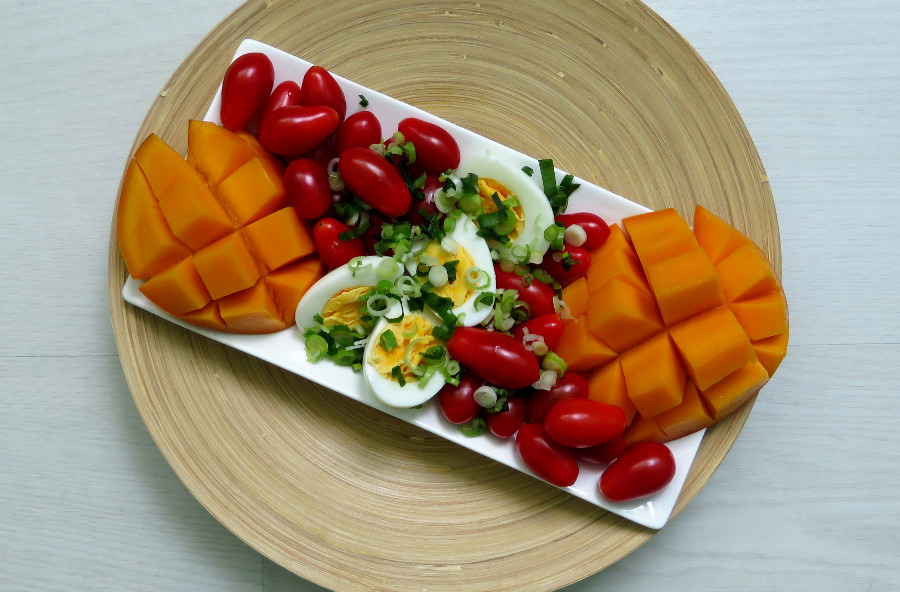 Breakfast platter with fresh mango, cherry tomatoes and hard-boiled eggs garnished with scallions. We bought all the ingredients, except the scallions, at a farmers market in Taichung. We carried the scallions from a street market near Taipei’s Yongchun station. 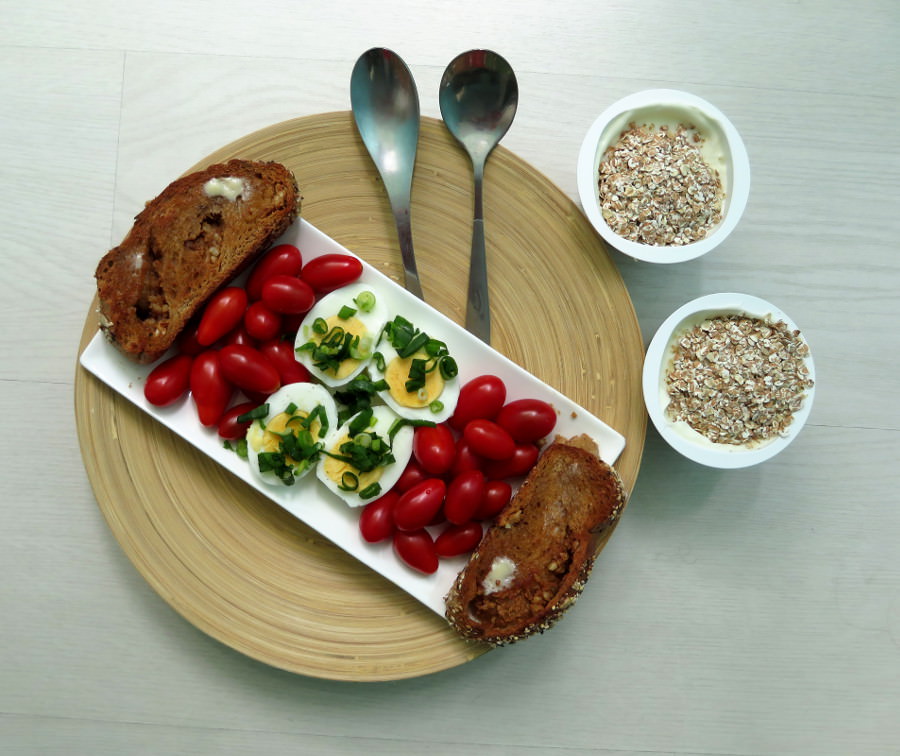 Breakfast platter with whole-wheat toast, cherry tomatoes and hard-boiled eggs garnished with scallions. Served with yogurt and muesli. The whole-wheat bread from a bakery next to the farmers market in Taichung was a unique find. 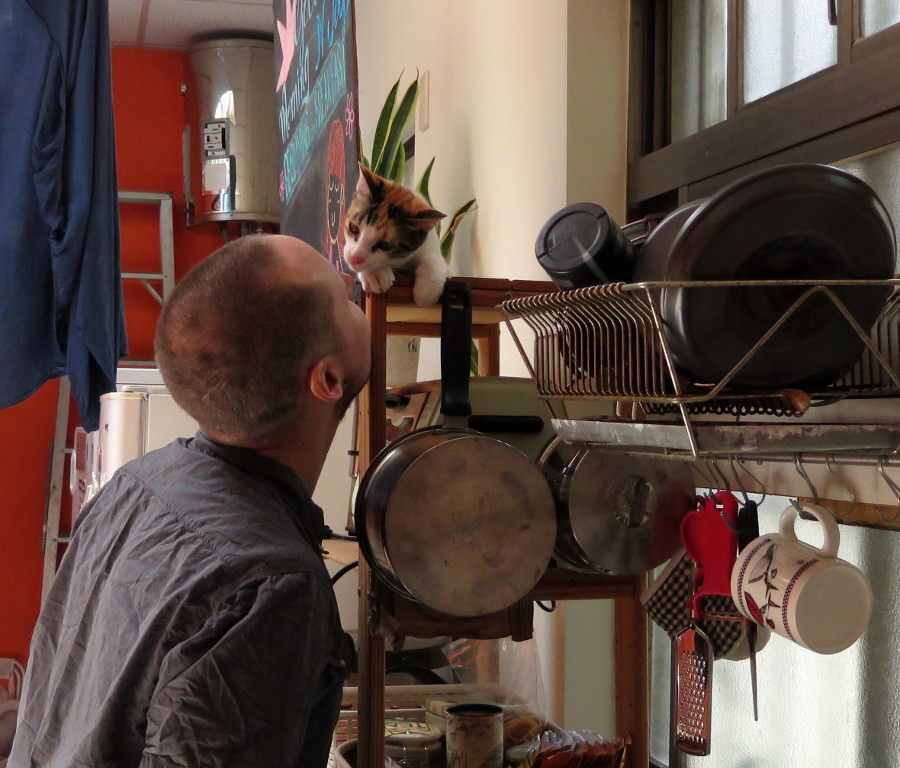 We were lucky to find good ingredients, but hostel cooking wasn’t without problems. Specifically, cat hair. I’m a cat person, but I’m not a cat-in-the-kitchen person. Now I know how spoiled I was back in Seattle that my own kitty came trained not to get on kitchen counters (or furniture).

We planned to stay a month. This allowed us to circumnavigate the island by train—inexpensive and worthwhile. (One tip: book ahead for tickets along the east coast. Standing between compartments with students comes with bragging rights among travelers. Sitting in a seat for 3-hr journeys is a far better experience.) At the end of our time, we still weren’t ready to leave. The food in Taiwan held us up another week. We ended our exploration of the island with with a boat ride back to Xiamen in mainland China.

In total, we visited five Taiwanese cities: the east coast city of Hualien (花蓮), the southern cities of Kaohsiung (高雄) and Tainan (台南), the northern capital of Taipei (台北), and the western city of Taichung (台中). We traveled only by train for a total cost of US $150 for both of us using point-to-point tickets. This was a far better deal than the overnight ferry between Xiamen and Taiwan. That boat cost US $200 one-way for the two of us, but did include beds in shared sleeping compartments.

The Cost of Food in Taiwan

With inexpensive transportation and accommodations (we averaged US $40 per night), Taiwan delivers amazing experiences for the price. Except for coffee, both sightseeing and food in Taiwan are affordable. For example, this tasty lunch prepared on the spot only cost US $10: 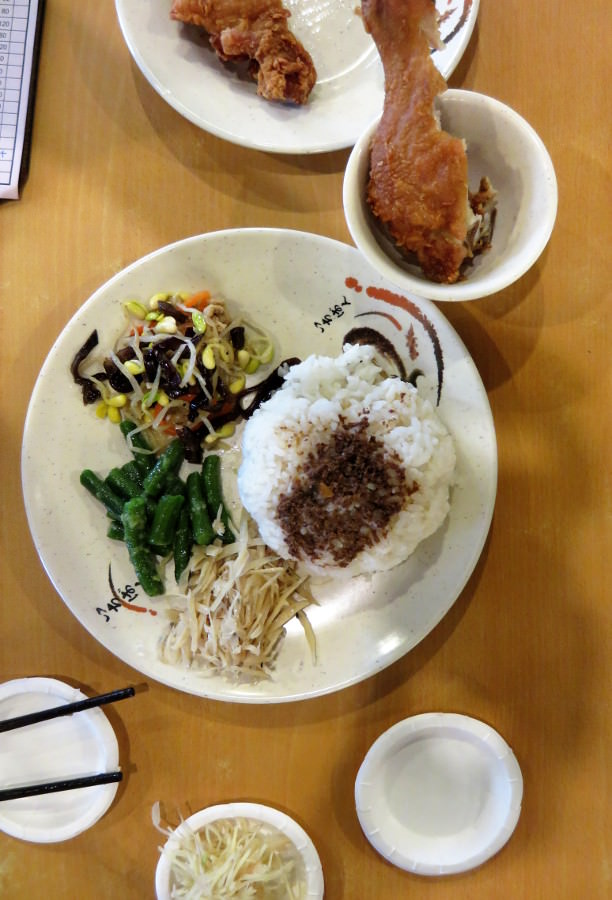 Fried chicken plate from Jin Ji Yuan in the Da’an District of Taipei. We started with a steamer full of xiaolongbao (not shown). This is a fun neighborhood to wander—you’ll find lots of other restaurants, cafes and ice cream. It’s also near the original Din Tai Fung, if you like waiting in long lines. (Since I’ve never been to the so-called but not really “original” Starbucks and I’m from Seattle, Din Tai Fung wasn’t a must.)

At US $4, maybe the ice cream in Taiwan isn’t cheap. But it’s a steal compared to one overrated Seattle chain with endlessly long lines in summer. 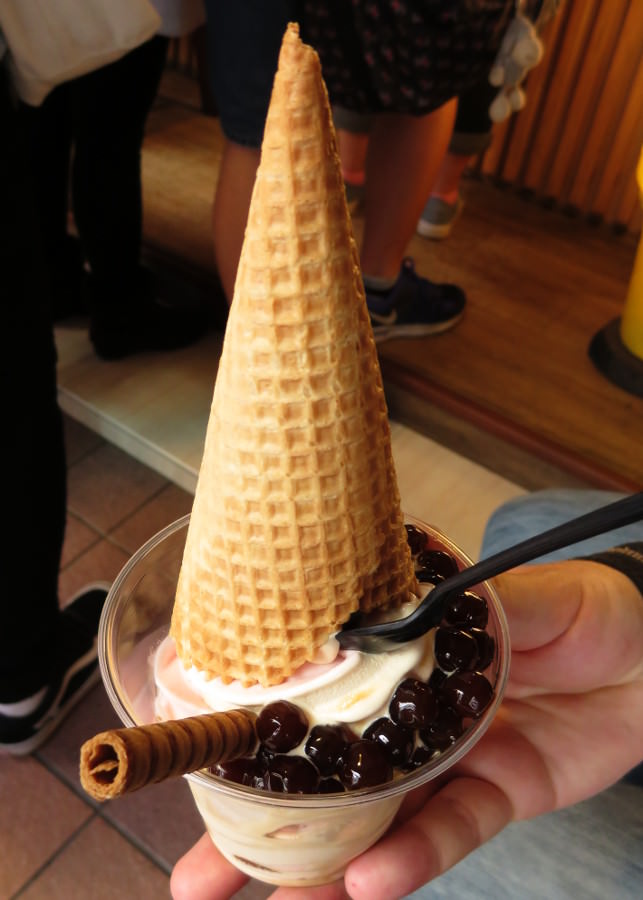 It’s easy to forget about soft-serve amongst all the delicious shaved ice and tofu pudding. But soft-serve ice cream is all over Taiwan, often in delicious flavors like matcha and oolong tea. One of the best we ate was from a tiny window with a long line at 丸浜霜淇淋 (I don’t think it has an English name). It also doesn’t have an English menu but there’s only two flavors any given day. Ordering a twist of both flavors with everything (in this case a cone, cookie and boba) is the right choice.