What to do in Taiwan when traveling with your parents? Well, if we lived there, we’d have plenty of ideas. But we’re only travelers who arrived in Taipei one night before my parents did. Granted we’d been touring around Taiwan for two weeks at that point. This was quite a relief to my mom who had booked the flight while we were still in Seattle. I’d promised we’d make it to Taiwan by whatever date she chose—but no, we didn’t have a flight there. We’d be sailing on one of the twice-weekly crossings from China. We would worry about buying tickets for that once we got to Xiamen. My mom decided to give us extra time and booked the trip for mid-April. This meant Taipei is where she would celebrate her 72nd birthday.

Our end of March departure from China helped allay my parents fears of arriving in Taiwan before us. It did nothing but amplify my own fears about traveling with my parents in Taiwan. They are not high-maintenance by any means. If I told them there was only a bathroom down the hall, well that’s what they’d book for themselves. (In fact, we all shared a lovely apartment which had a Western toilet.) No TV, no problem. Subways and walking instead of taxis. Great! More money to spend on … as it turns out for this trip, shaved ice and coffee.

But they expect certain amenities (as do I). Like sidewalks. Also, they are true Seattleites. While Seattle is not as rainy as visitors believe it to be, the skies ARE often gray (and we like it that way). My mom thinks 65 degrees is warm. And my dad, let’s say he’s not the most adventurous of eaters. I knew my explanations of untranslated menus was not going to suffice. “This one is noodles with some kind of meat; probably pork, there’s probably soup involved, and … some other stuff.” The hot and humid weather. The complete lack of sidewalks. The fish with both heads and tails attached. How were my parents going to make it through ten days of traveling with us in Taipei? Not to mention our terrible Chinese language skills or my mom’s serious allergy to shrimp.

The First Day in Taipei

As was the case for us, my parents entry into Taiwan didn’t start smoothly. After a 14-hour flight and delays through customs, I met them at the airport. We lined up for the one cab ride we planned to take. I avoid cabs when possible, so I don’t have much experience, but this ride was the craziest I’ve been in. Suffice it to say, we reached the apartment in haste. I thought my dad might stay in Taipei for good, simply to avoid ever taking another cab in Taiwan. (This driver turned out to be an anomaly. Their return to the airport was pleasantly uneventful.) Worn out, but now also full of adrenaline, Taiwan immediately delivered. Iced boba milk teas with fresh strawberries right across the street. Those drinks set the tone for the next ten days. Taipei repeatedly delivered beyond our expectations.

But back to the opening question. So what should you do while traveling with parents in Taiwan? As it turns out, plenty.

Let’s start with the obvious. Cake and coffee is always a welcome suggestion. There are so many cafes in Taipei, this could be a daily activity. For us, it often was, as shown by this extensive list of Taiwan coffee shops. 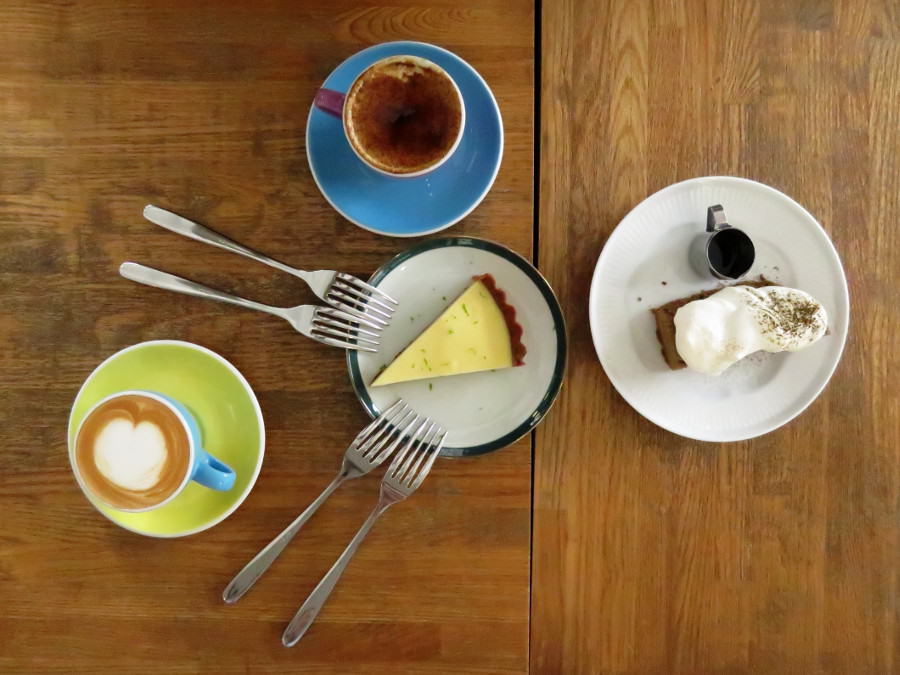 Then there’s birdwatching. A perfect activity to share while traveling with your parents, right? I admit the most avid birdwatchers I know are both younger than me. In fact, my mom once admitted to boredom while on an excursion with a bunch of birders. My dad likes birds about as much as I like spiders. (He can manage to keep himself from running away while shrieking.) So although in this group I was the birder, everyone had a good time.

But if bird watching is not your thing, then perhaps turtle watching sounds appealing. 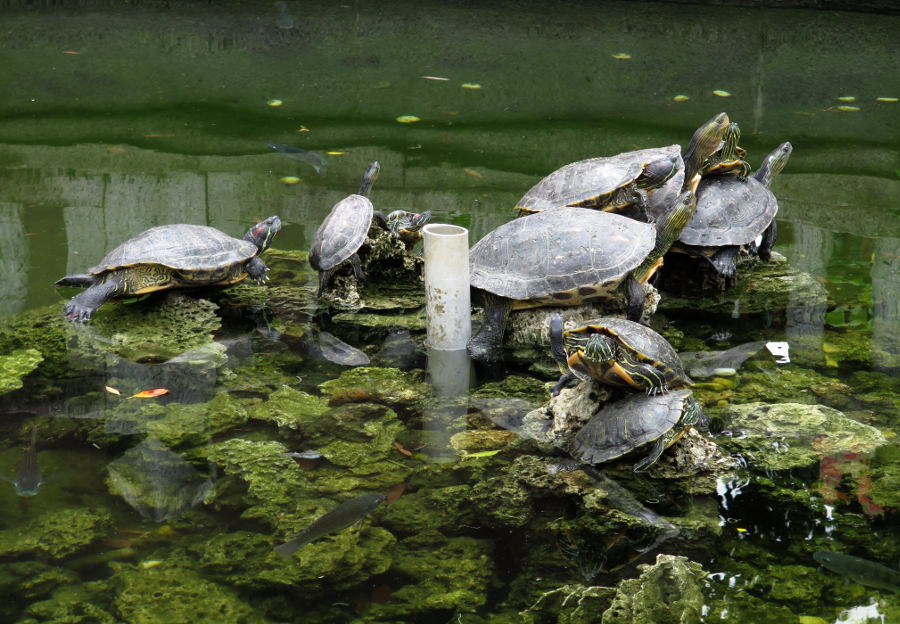 Taipei’s Confucius Temple feels like a museum with plenty of interesting displays. Still, I can’t claim I didn’t enjoy watching the pile of turtles in the temple’s courtyard just as much.

Must-Do Taipei (Even Without Your Parents)

I’ve heard not everyone likes museums. To be honest, I’m not sure I know those people. It definitely does not describe my parents (or myself, or my husband, thankfully). Like any sizable city, Taipei has a selection to choose from. Still, there is only one absolutely-can’t-miss museum. I’ve wanted to visit it for over 15 years. I was happy to find the National Palace Museum was as impressive as I’d hoped. Besides, how can you not like a museum whose two most famous pieces relate to food? I don’t quite get the meat-shaped stone but the jadeite cabbage is one of the most exquisite pieces I’ve ever seen. 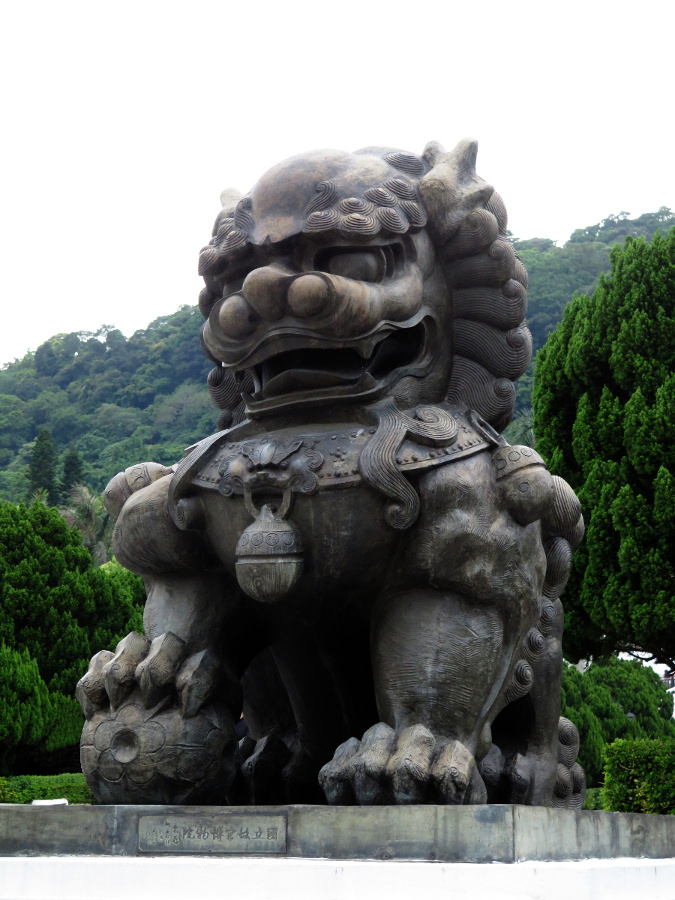 A lion guards the National Palace Museum, the largest repository of Chinese art in the world. For something completely different, we combined a trip here with the Shung Ye Museum of Formosan Aborigines. This museum is tiny by comparison and down the street. It has fascinating exhibits on Taiwan’s 14 recognized indigenous tribes.

Another grand site that seems too big for this small island country: National Chiang Kai-shek Memorial Hall. We paired it with a visit to the nearby 228 Peace Memorial Park for an interesting contrast. 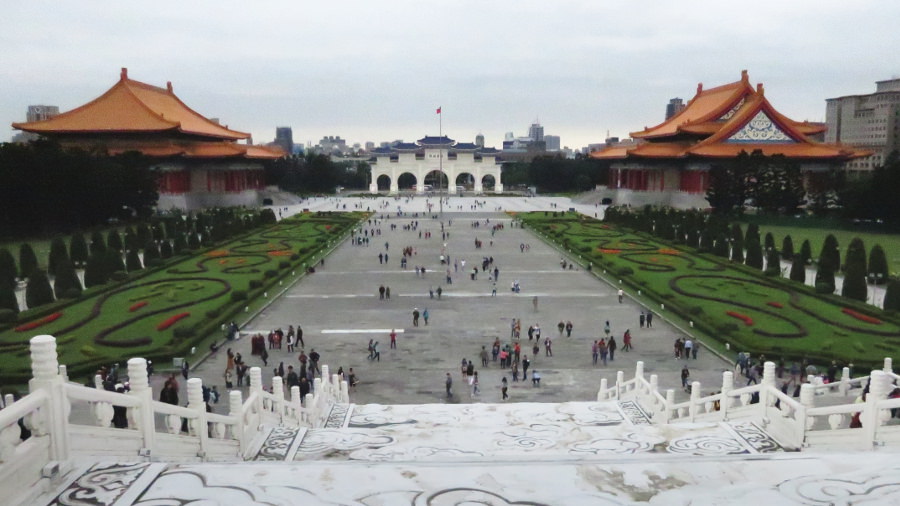 Looking out over the courtyard from the top of the Chiang Kai-shek Memorial Hall in Taipei, Taiwan. There are plans to rename (again) this controversial monument and remove the statue of Chiang Kai-shek, largely due to his role in the 2.28 Incident. 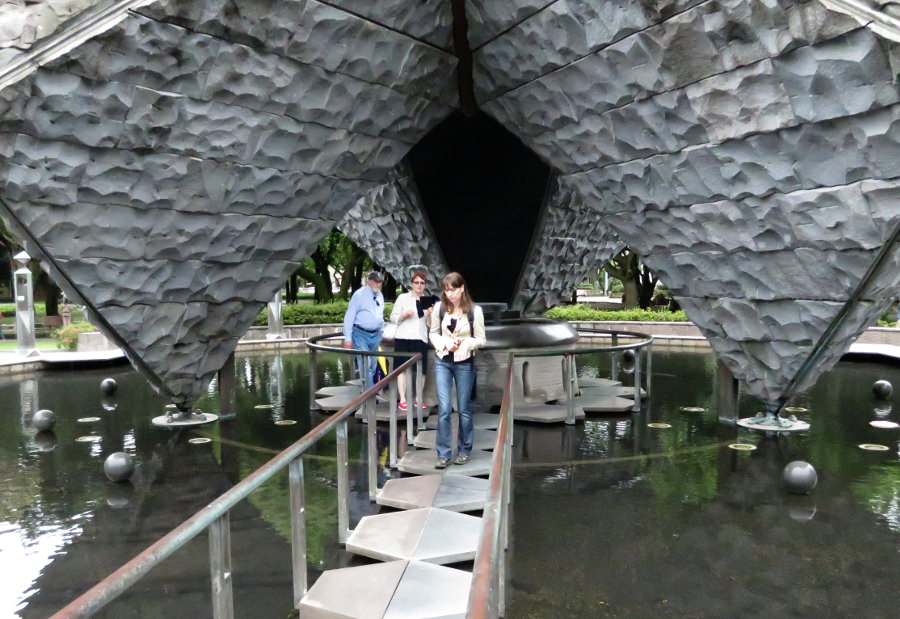 A striking memorial to the victims of the 2.28 Incident stands in 228 Peace Memorial Park in Taipei, Taiwan. Thousands of civilians were killed in 1947 during an uprising against Chiang Kai-shek’s government.

Being a small country, Taipei has lots of nearby excursions. We only had time for one. My parents don’t like heights. But they still enjoyed the gondola ride up to Maokong for a beautiful view over the city and a restful tea break. We stopped off at Zhinan temple on the way back down for more views and gorgeous interiors. We ended the day with my mom’s birthday dinner at a local Peruvian restaurant. (Random? Kind of. Delicious? YES!) Finally, we had one of those “you know you’re in Taipei when … ” moments to be forever grateful for. After dinner, we wandered down the street for some type of birthday-like treat. Soon after, we returned with a beautiful fresh strawberry cake complete with candles. Happy Birthday, mom! 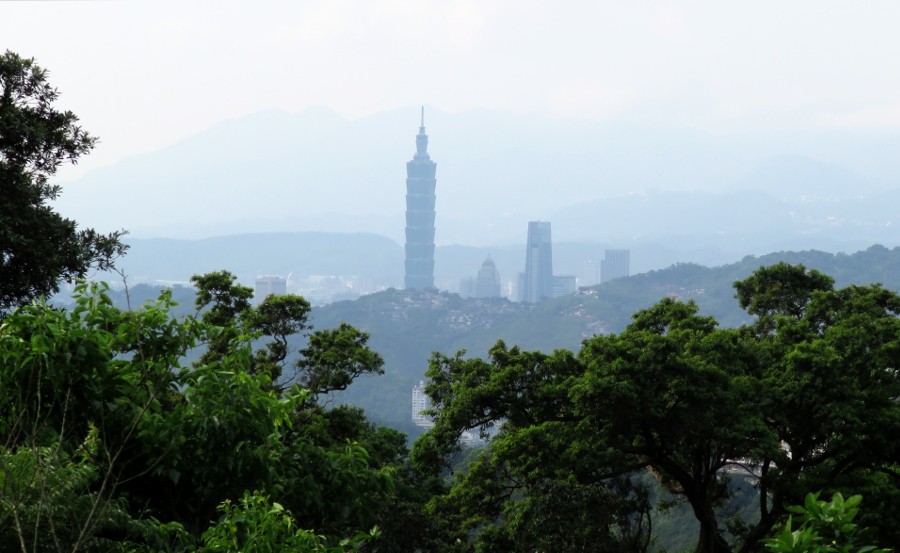 Walking along the main road at the top of the gondola to Maokong provides glimpses of Taipei below. Most prominent among landmarks is the bamboo-shaped skyscraper, Taipei 101. For six years, it was the tallest building in the world. But Taipei 101 is still the world’s tallest green building (LEED Platinum certification). Maokong is also a great option for views over the city if you’re not up to climbing Taipei’s Elephant Mountain. 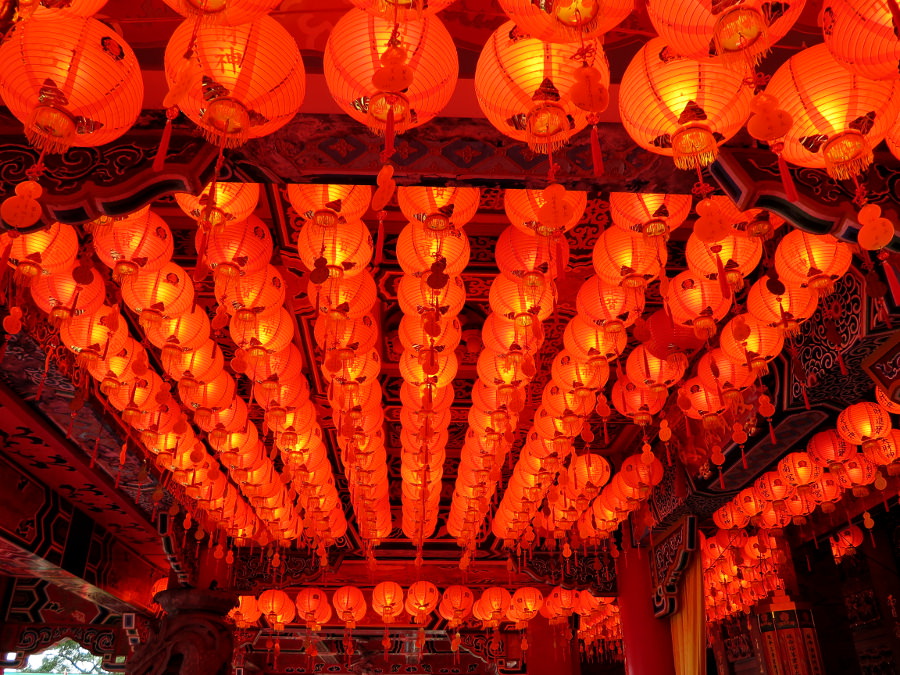 Easy to access from the Maokong Gondola, Taipei’s Zhinan Temple is a huge complex. But it was peaceful and quiet during our weekday visit. The main halls are elaborately decorated, including this ceiling covered in red lanterns.

Cooking and Drinking in Taiwan

Regardless of the sightseeing hot spots, my parents enjoyed eating breakfast at “home.” (Especially since we did the cooking). One of the benefits of traveling with your parents in Taiwan is that apartment rentals in well-located neighborhoods are very affordable. We were excited to have a usable kitchen for their entire stay. 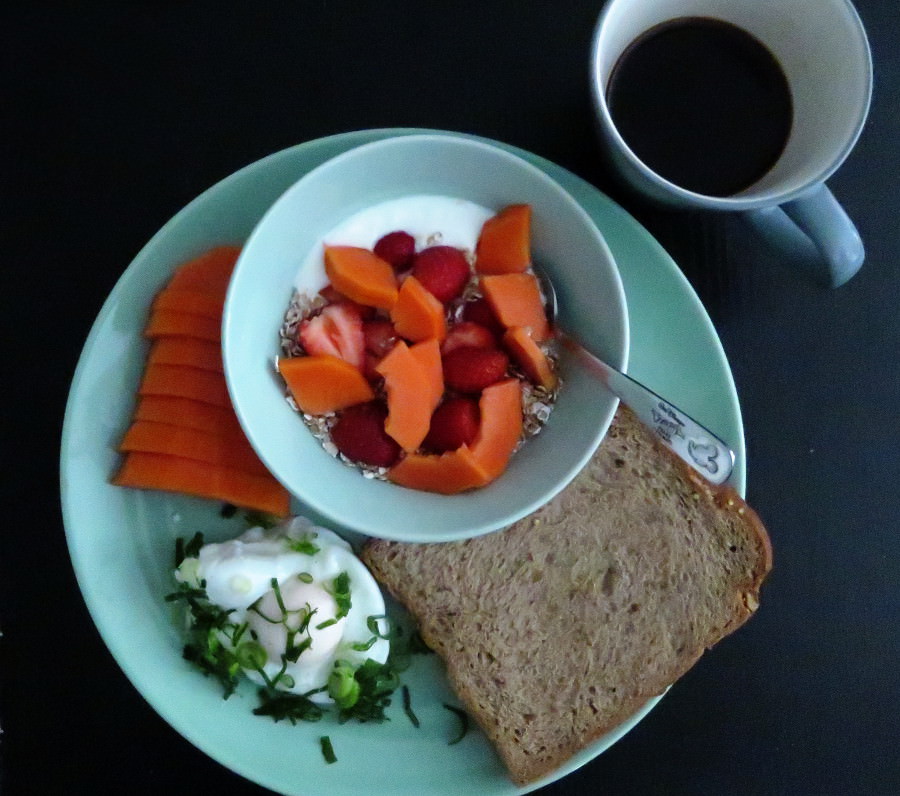 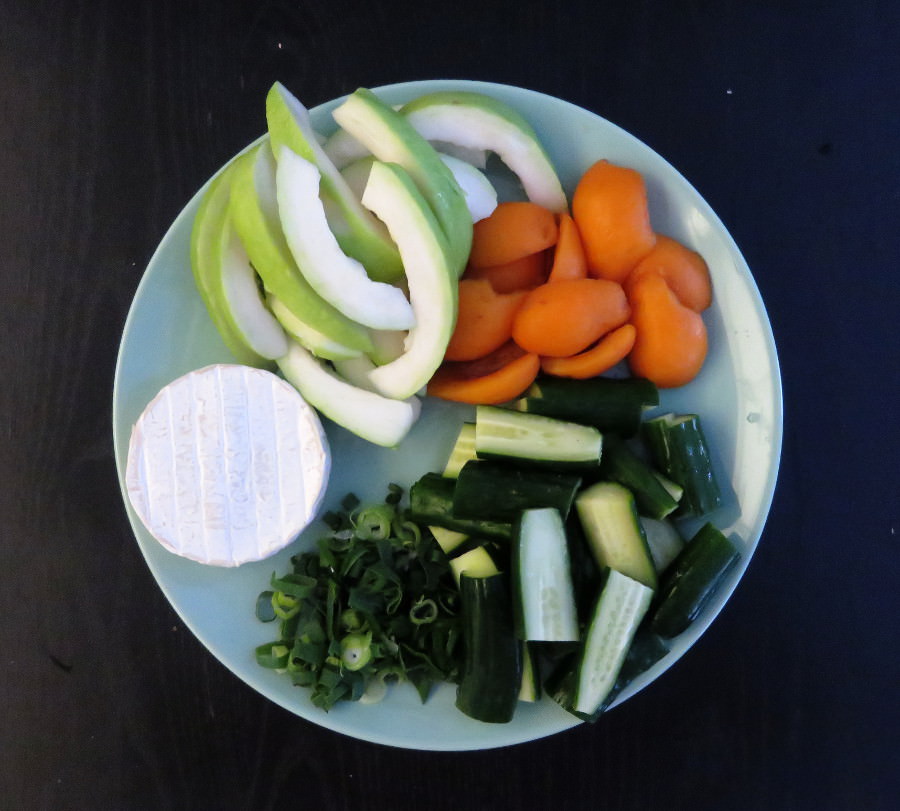 Our street featured two organic grocers, many bakeries and a wet market nearby. We often found fresh fruits, vegetables, cheese and bread for snack-worthy spreads. This plate included cucumbers, loquats and (my favorite) guava along with Camembert cheese.

Besides, if we weren’t cooking for ourselves, how would we take advantage of what the local wet market had to offer?

And should you be so lucky your parents are anything like mine, remember every big city in Asia has a craft beer scene. Taipei, of course, is no exception. 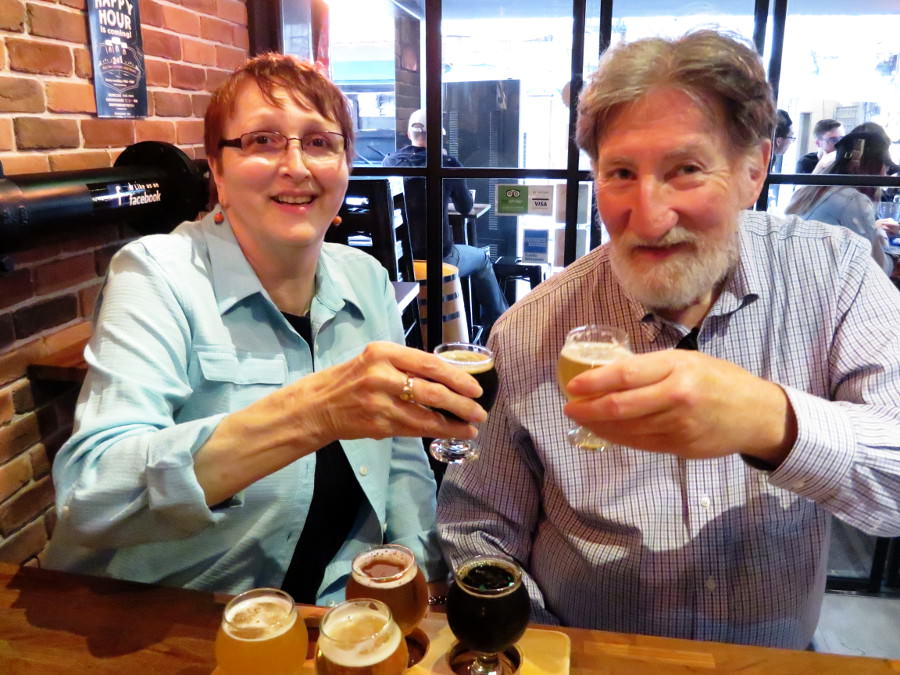 Toasting to a good trip with the beer sampler at Zhangmen Brewing in Taipei, Taiwan.